Ted Walsh moved to Santa Rosa last year to help a relative, learn a new business and settle down with his family. But like the guy in the gangster movie, he got pulled back for one more job.Walsh, who is helping his father-in-law run Wikiup Tennis & Swim... 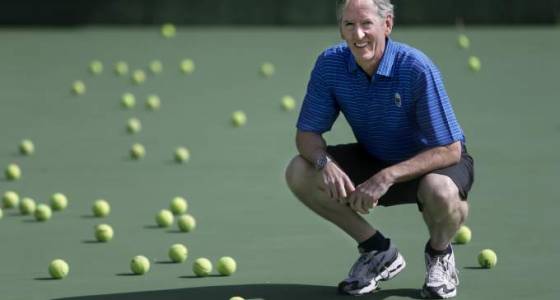 Ted Walsh moved to Santa Rosa last year to help a relative, learn a new business and settle down with his family. But like the guy in the gangster movie, he got pulled back for one more job.

Walsh, who is helping his father-in-law run Wikiup Tennis & Swim Club, spent a total of 35 years as a 49ers equipment staffer and Major League Baseball clubhouse manager. He will reprise the latter role in March when he serves as clubhouse manager for Team USA in the World Baseball Classic.

Walsh’s preparation for this sort of task began when he was still attending Concord High School. A friend had a dad who worked for the 49ers, and the dad was looking for a couple of helpers for training camp at Santa Clara University.

“I thought it would be one-and-done,” he said recently, sitting in the tennis clubhouse at Wikiup.

Instead, Walsh was invited back to work with the Niners’ equipment manager, and the next year passed up enrolling at St. Mary’s to take a full-time position with the team. He would spend 16 years helping to keep the 49ers’ equipment in working condition and their uniforms freshly laundered.

Though admired for his attention to detail and fondness for practical jokes, Walsh is perhaps best remembered as the guy who taught Jerry Rice to catch left-handed throws. As the Niners were transitioning from Joe Montana to Steve Young, the ever-vigilant Rice wanted repetitions catching the opposite spin of a lefty’s passes.

The nearest available southpaw was Walsh.

“Ted saved my arm,” Young told the Los Angeles Times in 2010. “Jerry wanted to catch four million passes a day, and I needed Ted to throw 3½ million of them or I wouldn’t have made it.”

Early in his career with the 49ers, Walsh started helping the Milwaukee Brewers in spring training. He loved baseball and wanted to run his own department, and in 1997, Cleveland Indians manager Mike Hargrove came through with a job offer.

While working for the Indians, Walsh met and married Cybele Lamonica, who had grown up in Santa Rosa and attended Ursuline High. Her father, Peter Lamonica, had owned at least a part of the Wikiup club since 1978, and had actively run it since 1981. Ted Walsh took a job with the Seattle Mariners in 2003 partly so Cybele would have an easier time getting home for visits.

Walsh was the Mariners’ home clubhouse manager for 10 years and their visiting clubhouse manager for three, until the team dismissed him in October of 2015. It didn’t take Walsh’s father-in-law long to make a proposal. Lamonica wanted him to move to Santa Rosa and gradually take over operation of the club. Walsh gave it a trial run last summer and decided to give it a run.

“It’s definitely a challenge,” he said. “It’s something a little bit out of my box.”

At Wikiup, Walsh found a little gem of a club with six tennis courts, three pools (they open April 21 for swim season) and a private picnic area on four woodsy acres. He thinks he can do more with it. Walsh invited former 49ers Ronnie Lott and Harris Barton, both now successful businessmen, for consultations. He hired a new tennis pro, and he wants to beef up youth programs. Walsh is thinking of expansion.