Widow of man shot in Pasco theater says ex-cop was 'rude,' 'angry' and 'demanding' before he fired

DADE CITY — Nicole Oulson, widow of the man who was killed in a Wesley Chapel movie theater, testified Thursday that Curtis Reeves was "rude," "angry" and "demanding" before he shot her husband.2 Days Ago8 Months Ago5 Months... 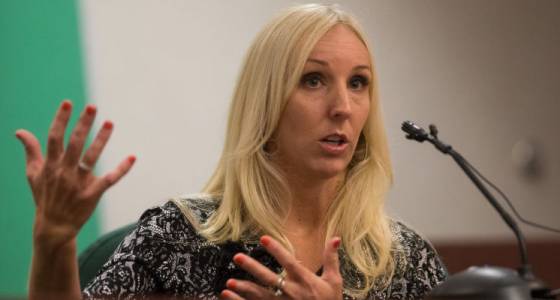 DADE CITY — Nicole Oulson, widow of the man who was killed in a Wesley Chapel movie theater, testified Thursday that Curtis Reeves was "rude," "angry" and "demanding" before he shot her husband.

Oulson, who was seated next to Chad Oulson in a Cobb Grove 16 theater, said "it felt like an order" when Reeves asked her husband to turn off his cellphone during previews for the movie Lone Survivor.

"In a movie theater, to me, a whisper is appropriate," Nicole Oulson testified. "To me, it was not a whisper."

When Reeves returned, he said something to the effect of, "I see that you put the phone away now that I went to get management," Oulson testified.

Chad Oulson stood and turned to confront Reeves. When he did, Nicole Oulson put a hand out to try to restrain him.

In court, she said she couldn't recall details of what Oulson and Reeves said in the confrontation. But it was then that Reeves fired a single shot from a pistol.

The bullet grazed Nicole Oulson's finger before it hit her husband in the chest. He died.

The widow's testimony came a day after Reeves' wife, Vivian, gave her own account of the shooting. She said Oulson used profanities when Curtis Reeves told him to put away the cellphone and that she thought he was coming over the seats moments before the shooting happened.

Reeves' attorneys are arguing that he killed Chad Oulson in self-defense, citing Florida's controversial "stand your ground" law. The law says a person has no duty to retreat when faced with a violent confrontation and can use deadly force if he or she fears great bodily harm or death.

The defense has argued that Chad Oulson hit Reeves, now 74, with a cellphone, then threw a bag of popcorn at him before the fatal shot.

Pinellas-Pasco Circuit Judge Susan Barthle is weighing evidence to determine whether Reeves should be immune from prosecution under the law. Otherwise, Reeves will head toward trial on a charge of second-degree murder.

Nicole Oulson has sat in the front row of the courtroom gallery through each day of testimony this week. Her attorney, T.J. Grimaldi, has sat beside her.

Grimaldi represents Oulson in a lawsuit she filed against the theater company, Cobb Theatres, and its manager, Thomas Peck, alleging they didn't enforce a policy prohibiting weapons.

Before Oulson took the stand Thursday, Reeves' defense attorneys raised a concern with the judge regarding the anticipated testimony of members of the Pasco County Sheriff's Office.

Their concern, as explained in court, involved public comments Sheriff Chris Nocco made immediately after the 2014 shooting, and again Wednesday after the defense repeatedly criticized the agency's investigation of the shooting.

Reeves' attorneys have pointed out that investigators did not instruct witnesses to refrain from discussing the shooting immediately after it happened, among other issues. At one point, attorney Richard Escobar called the sheriff's investigation a "disaster."

A TV news story said the Sheriff's Office had expressed disappointment over those comments.

In response, Escobar asked that any current Sheriff's Office employees who testify be designated as "adverse parties." The designation would allow the defense to ask leading questions of the witnesses.

The judge granted the request out of "an abundance of caution."

Later Thursday, the court heard testimony from Allen Wolfe, a man who sat in front of the Oulsons during the movie previews. He said he struck up a brief conversation with Chad Oulson minutes before the shooting. The two spoke briefly about the movie they were going to see.

Later, Wolfe said, he heard Oulson use profanity and tell someone to shut up, that he was texting his daughter.

Wolfe turned and saw Oulson standing, turned toward the back row. Wolfe said he started moving toward the confrontation, intending to try to break up a fight.

Then, he heard the shot.