Until the phone rang on Feb. 8, Devinder Malhotra had all but forgotten about "Plan B."A couple of weeks earlier, he had agreed — at least in theory — to come out of retirement if something went awry with the search for a new chancellor at the Minnesota... 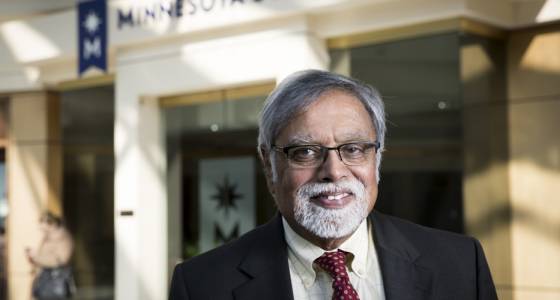 Until the phone rang on Feb. 8, Devinder Malhotra had all but forgotten about "Plan B."

A couple of weeks earlier, he had agreed — at least in theory — to come out of retirement if something went awry with the search for a new chancellor at the Minnesota State college and university system, where he had worked for seven years.

But Malhotra, 69, never expected it to happen. And after four decades in academia, he was enjoying retirement too much to think about it.

Then came the phone call: The board of trustees had abruptly decided that none of the three finalists was a good match. Would he take the job for a year?

Now Malhotra, who retired last July as interim president of Metropolitan State University, is back in the game. On Feb. 9, he hopped a plane from Akron, Ohio, where he and his wife now live, to accept the job in St. Paul as interim chancellor of the sprawling Minnesota State system and its 54 campuses.

"We're so happy that he did," said Michael Vekich, the chairman of the board. "We are truly, I'll use the word blessed that a man of his caliber would take on this responsibility."

Officially, Malhotra will start the job this summer, giving trustees another year to find a permanent replacement for Chancellor Steven Rosenstone, who retires in July. But the new interim chief is already at work, trying to catch up on all he missed since he left the academic world.

While many were caught by surprise by the decision, the reaction to Malhotra has been almost jubilant.

He was greeted with a standing ovation when Vekich announced his appointment at the Feb. 9 trustees meeting. "[He's] very much a respected leader," Vekich said.

Even more telling are the rave reviews from faculty leaders who often clashed with Rosenstone.

Malhotra, who was born in a "small provincial town" in India, arrived in the United States in 1975 to get his Ph.D. in economics at Kansas State University. He taught at the University of Akron for nearly 30 years, and spent four years as dean of the college of arts and sciences at the University of Southern Maine before he was lured to Minnesota in 2009 as provost and vice president for academic affairs at St. Cloud State University. He ended his career — or so he thought — in 2016, after two years as interim president at Metro State.

In Minnesota, he earned a reputation as a thoughtful and even-keeled leader, said Jim Grabowska, president of the Inter Faculty Organization, the faculty union at the seven state universities.

"Among our membership, I haven't heard [anyone] rain on this parade," he said.

Monte Bute, an outspoken sociology professor at Metro State, also is a fan of Malhotra.

"We were in pretty tumultuous waters when he came along, and I think he settled things down," Bute said. At the time, the St. Paul campus was beset by problems, including a payroll system that left some faculty unpaid for months.

"He set a very different tone," Bute said. "I just found him a man of real integrity."

Malhotra, who turns 70 in April, admits that he was relishing life post-retirement — traveling to Europe and India, visiting his daughter and granddaughter, reading several books at a time — and has no desire to give it up permanently.

But when Vekich came calling, he said, he felt he couldn't say Jestbahis "no."

"Obviously it would take a lot to get me out of retirement," he said. But he is committed to continuing the work, started under Rosenstone, to help the state colleges and universities adapt to growing financial pressures without jeopardizing their quality and affordability.