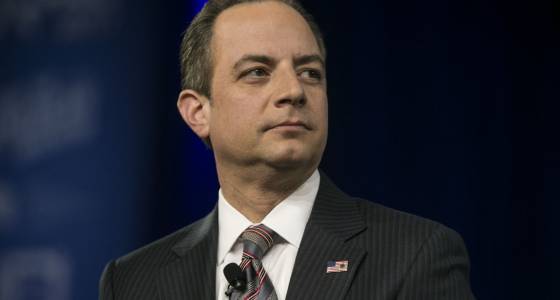 WASHINGTON—The White House on Friday defended chief of staff Reince Priebus against accusations he breached a government firewall when he asked FBI Director James Comey to publicly dispute media reports that Trump campaign advisers had been frequently in touch with Russian intelligence agents.

U.S. President Donald Trump’s press secretary, Sean Spicer, argued Priebus had little choice but to seek Comey’s assistance in rebutting what Spicer said were inaccurate reports about contacts during last year’s presidential campaign. The FBI did not issue the statement requested by Priebus and has given no sign one is forthcoming.

“I don’t know what else we were supposed to do,” Spicer said.

The Justice Department has policies in place to limit communications between the White House and the FBI about pending investigations. Trump officials on Friday not only confirmed contacts between Priebus and the FBI, but engaged in an extraordinary public airing of those private conversations.

Spicer said it was the FBI that first approached the White House about the veracity of a New York Times story asserting that Trump advisers had contacts with Russian intelligence officials during the presidential campaign. Spicer said Priebus then asked both FBI Director James Comey and Deputy Director Andrew McCabe if they would condemn the story publicly, which they declined to do.

“The chief of staff said, well, you’ve put us in a very difficult situation,” Spicer said. “You’ve told us that a story that made some fairly significant accusations was not true. And now you want us to just sit out there.”

Friday’s revelations were the latest wrinkle in Trump’s already complicated relationship with the FBI and other intelligence agencies. He’s accused intelligence officials of releasing classified information about him to the media, declaring in a tweet Friday morning that the FBI was “totally unable to stop the national security ‘leakers’ that have permeated our government for a long time.”

House Democratic Leader Nancy Pelosi accused Priebus of “an outrageous breach of the FBI’s independence” and called on the Justice Department’s inspector general to look into all conversations Priebus and other White House officials have held with the FBI on ongoing investigations.

“The rule of law depends on the FBI’s complete independence, free from political pressure from the targets of its investigations,” Pelosi said.

A 2009 memo from then-attorney general Eric Holder said the Justice Department is to advise the White House on pending criminal or civil investigations “only when it is important for the performance of the president’s duties and appropriate from a law enforcement perspective.”

Ron Hosko, a retired FBI assistant director who oversaw criminal investigations, said the discussions between the FBI and the Trump White House were inadvisable.

“It is a very slippery slope,” Hosko said. “Do I get in the position of where I’m updating the White House on my priority criminal cases? The answer is no, I should not be doing that.”

Other FBI veterans said the interactions between Priebus and the FBI were not unprecedented. Robert Anderson, a retired executive assistant director who served under Comey and oversaw counter-intelligence investigations, said contacts between the bureau and White House are “usually very-well documented” in order to avoid the perception of inappropriate contacts.

CNN first reported that Priebus had asked the FBI for help, and a White House official confirmed the matter to The Associated Press Thursday night. On Friday morning, two other senior White House officials summoned reporters to a briefing to expand on the timeline of events.

The White House officials would only discuss the matter on the condition of anonymity. Two hours later, Trump panned news stories that rely on anonymous sources, telling a conservative conference that reporters “shouldn’t be allowed to use sources unless they use somebody’s name.”

Spicer later briefed some reporters on the record. The Associated Press declined to participate in that briefing because some major news organizations were not invited, but an account was posted by a reporter who was present.

Trump has been shadowed by questions about potential ties to Russia since winning the election. U.S. intelligence agencies have concluded that Russia meddled in the campaign in an effort to help Trump defeat Democrat Hillary Clinton.

On Feb. 14, the New York Times reported that intelligence agencies had collected phone records and call intercepts showing frequent communication between Trump advisers and Russian intelligence agents during the campaign. Trump has said he is not aware of such contacts.

The White House says Priebus was holding a previously scheduled meeting with McCabe the morning after the New York Times story was published. According to Spicer, McCabe told Priebus in “very colourful terms” that the report was inaccurate, prompting the chief of staff to ask if the FBI would make its view known publicly.

Spicer said McCabe told the White House the bureau did not want to be in the practice of rebutting news stories. A similar message was conveyed to Priebus later in the day by Comey, according to the White House press secretary.

The White House said McCabe and Comey instead gave Priebus the go-ahead to discredit the story publicly, something the FBI has not confirmed.

Priebus alluded to his contacts with the FBI over the weekend, telling Fox News that “the top levels of the intelligence community” had assured him that the allegations of campaign contacts with Russia were “not only grossly overstated but also wrong.”

During the campaign, Trump and other Republicans strongly criticized a meeting between Attorney General Loretta Lynch and former president Bill Clinton, husband of Trump’s general election opponent. The meeting came as the FBI — which is overseen by the Justice Department — was investigating Hillary Clinton’s use of a private email address and personal Internet server.

Spicer said he was not aware of an FBI investigation into Trump campaign advisers’ contacts with Russia. Administration officials have acknowledged that the FBI interviewed ousted national security adviser Michael Flynn about his communications with Russia’s ambassador to the U.S. during the transition.

Flynn was fired after it was revealed that he misled Vice-President Mike Pence and other White House officials about the content of those conversations.