GLOUCESTER TWP. -- Generally, food fights are discouraged in school. But more than Camden County middle schoolers got to send dozens of hot dogs flying around a gymnasium Saturday as part of a competition to build the best sausage launcher.... 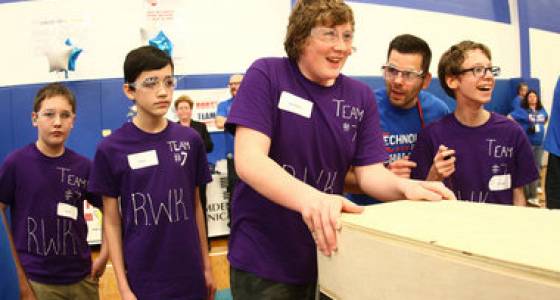 GLOUCESTER TWP. -- Generally, food fights are discouraged in school. But more than Camden County middle schoolers got to send dozens of hot dogs flying around a gymnasium Saturday as part of a competition to build the best sausage launcher.

The contest at Camden County Technical School in Sicklerville drew over 100 students.

The teams were made up with up to four students from a school, with bigger schools sending more than one team.

They spent the morning building their contraptions, using blue prints, power tools, PVC pipe, wiring, and valve and air regulators. They had help from construction technology, auto mechanics, and pre-engineering instructors from the technical school. The launchers were then connected to an air compressor.

After lunch -- which was not hot dogs -- they watched and cheered as the sausages flew around the gym.

The winners were the teams that got the most points for hitting wooden targets, according to the release.

Audubon Middle School won the safety award and Rohrer Middle School in Haddon Township was recognized for its engineering documentation, according to Philly.com.

"This is a great activity that the staff at the Camden County Vocation School is hosting to celebrate National Technical Education Month, and to challenge young minds," Freeholder Carmen Rodriguez said in a statement. "I have been told that the hot dogs could travel up to 250 feet if students assemble the launchers correctly."