As regular readers of this column know, there's no shortage of warnings and tips from police and consumer advocates about how to avoid getting scammed.And yet people -- seniors especially -- continue to get ripped off at an alarming clip. The FBI estimates... 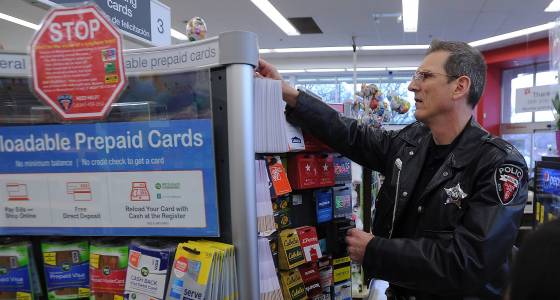 As regular readers of this column know, there's no shortage of warnings and tips from police and consumer advocates about how to avoid getting scammed.

And yet people -- seniors especially -- continue to get ripped off at an alarming clip. The FBI estimates that dishonest telemarketers take in $40 billion each year, and AARP says about 80 percent of the victims are 50 or older.

"We can write all the newspaper articles and hold all the seminars in the world, but that's just scratching the surface (of reaching potential victims)," Laverd told us. "We want to put these signs right at the point of sale. Hopefully it will draw people's attention."

The sign asks customers if they're buying a gift card to avoid trouble with the IRS, get a relative out of jail or avoid a utility shut-off -- common scare tactics used by phone scammers to get your money.

"ASK YOURSELF: Have you ever paid one of these bills with a gift card, Western Union or MoneyGram? If not, IT MIGHT BE A SCAM," the sign reads.

Laverd said store clerks often are trained to look out for scam victims, but they're sometimes understandably reluctant to confront customers. So far, he said, Walgreens and Wal-Mart have welcomed the signs.

"The reality is, once the money is gone, it's gone," he said. "There's very little chance of getting it back. This is one of those instances where prevention is everything."

The bill, sponsored chiefly by Barrington Hills Republican state Rep. David McSweeney, would prohibit people from receiving public employee survivor benefits if they are convicted of a felony involving the service of a spouse.

It was prompted by the outcry over news that Gliniewicz's widow, Melodie, stands to collect about $70,000 a year from her husband's death. That's despite the fact she's charged with multiple felonies linked to her husband's theft of thousands of dollars from the Fox Lake Explorer program.

Joe Gliniewicz killed himself in September 2015, staging the suicide to appear as if he were killed in the line of duty, in an effort to prevent disclosure of his crimes, authorities say.

McSweeney's bill would apply to future cases -- not that of Melodie Gliniewicz.

"The case of Lt. Gliniewicz and his wife was a national embarrassment for the people of Lake County and our state," said Grayslake Democratic state Rep. Sam Yingling, another of the bill's sponsors. "But what happened afterward with Melodie Gliniewicz trying to collect her husband's pension felt like a slap on the face to many Lake County taxpayers. It's common sense that those who help their spouses commit fraud against the taxpayers should not have their retirements funded by the taxpayer. End of story."

Two McHenry County sheriff's deputies who showed courage during a run-in with an armed murder suspect last year are sharing the 2016 Officer of the Year award handed out by the McHenry County Chiefs of Police Association.

Sgt. Tony Penna and Deputy Michael Urgo were working with the U.S. Marshals Great Lakes Fugitive Task Force on April 15 when they learned a stolen vehicle driven by double homicide suspect Gerald Boyes had been spotted in McHenry County. Penna and Urgo, joined by a pair of Lake County deputies, tracked the car to an Antioch bar and tried to arrest Boyes.

Boyes reached for a gun, leading the deputies to open fire and kill him.

Boyes was the main suspect in the slayings earlier that week of his father and his friend in Kentucky.

"Desperate behavior would only come naturally in that situation, and he could lash out at anyone," Prim said.

Foxx said prosecutors in her office will support issuing recognizance bonds, aka "I-bonds," in cases for defendants detained in the county jail for lengthy periods because they can't pay bail of $1,000 or less. An I-bond allows a person to be released on a promise to return to court when ordered.

"Public safety is best served by detaining those who pose a threat to our communities rather than jailing those who are simply poor and unable to post bond for nonviolent offenses," Foxx said. "This costs taxpayers millions of dollars per year, and does not serve public safety."

• Got a tip? Have a question? Please email Charles Keeshan and Susan Sarkauskas at copsandcrime@dailyherald.com, or call our tip line at (847) 427-4483.