Many people shy away from getting tattoos over fears about what they’ll look like on ageing skin.After all, what’s in fashion and appealing when you’re 21 might not be so cool when you’re 75.But now heavily-tattooed pensioners have revealed what body... 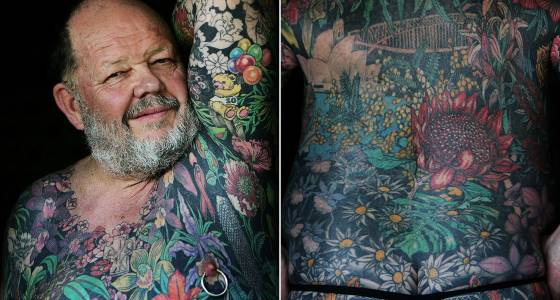 Many people shy away from getting tattoos over fears about what they’ll look like on ageing skin.

After all, what’s in fashion and appealing when you’re 21 might not be so cool when you’re 75.

But now heavily-tattooed pensioners have revealed what body art looks like on mature men and women.

And the striking series of images show elderly people looking pretty awesome with their ink.

Far from a subtle tattoo where no one can see it, the collection of portraits show the senior citizens rocking huge and often full body designs.

To complete his bold look, the bearded man wears silver hoops through both of his nipples.

An ink fan stripped off to flaunt her vibrant tattoos, which start at her feet and go all the way up to her neck.

The silver fox poses in a scarlet red bra and black mini skirt, while sitting on a black leather sofa.

Meanwhile, a grey-haired man stripped down to a pair of black briefs to flaunt his extensive collection of body art.

Age was no barrier for one woman who showcased her colorful neck, cleavage and shoulder designs.

What will those tattoos look like when she's older?! Helen Lambin, 81yrs, is more #badass than all of us. #tattoo #tattoograndma #tattoolife

The caption underneath reads: “‘What are you going to do about your tattoos when you’re older?!’

Other striking shots include a balding man who has Disney-inspired designs across his back, including a large Jungle Book one, and muscular grandfather with an array of red roses on his bicep.

If these elaborate designs have inspired you to go under the needle, Keith McCurdy of Bang Bang, who inks the likes of Rihanna and Kylie Jenner, has revealed the tattoo trends that are hot right now.

Fans have also being getting tattoo tributes to music and film icons who sadly passed away last year.

Foot tattoos and tongue ink are just some of the bizarre places you could get a design.