What the Obamacare replacement plan could mean in Illinois

Illinois health care leaders spent weeks bracing themselves for the worst as they awaited a bill to replace the Affordable Care Act.This week, that Obamacare replacement bill finally arrived — and it would mean significant changes for more than 356,000... 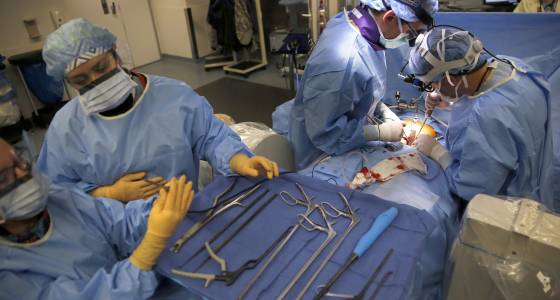 Illinois health care leaders spent weeks bracing themselves for the worst as they awaited a bill to replace the Affordable Care Act.

This week, that Obamacare replacement bill finally arrived — and it would mean significant changes for more than 356,000 Illinois residents who have coverage through plans purchased on the Affordable Care Act exchange. It would also affect more than 3 million Illinois residents covered by Medicaid, which is also targeted in the proposal.

Hospital leaders and patient advocates say the bill, if passed, would lead to fewer people in Illinois with health insurance, creating a dangerous and costly situation for patients, hospitals and the state.

Medicaid math and Illinois: How lawmakers' money grab primed taxpayers for a reckoning Editorial Board

"The fastest thing that is going to go when we are cutting spending in Washington is the 100 or 90 percent match rates for Medicaid. There is no way. It doesn't matter if Republicans are running Congress or Democrats are running it. No way we are going to keep match rates like that."

"The fastest thing that is going to go when we are cutting spending in Washington is the 100 or 90 percent match rates for Medicaid. There is no way. It doesn't matter if Republicans are running Congress or Democrats are running it. No way we are going to keep match rates like that."

The bill's supporters, however, say it would give states more flexibility to serve those most in need and provide more choices at better prices for consumers. Its introduction follows a year in which people who bought insurance through the exchanges saw their premiums skyrocket and their choices dwindle.

Some hospital leaders and patient advocates in Illinois are nervous. A.J. Wilhelmi, president and CEO of the Illinois Health and Hospital Association, said some Illinois residents might not be able to afford to continue buying coverage on the exchange under the House GOP plan.

That's because the bill would get rid of the tax credits that three-fourths of Illinois residents who buy coverage through the exchange received last year to help offset their insurance premiums. The amount a person receives is based on income, and the average consumer in Illinois received $237 a month in 2016, according to the U.S. Department of Health and Human Services.

In place of those tax credits, the House GOP plan would offer a different type of tax credit, worth $2,000 to $4,000 per individual. The amount would vary based on age, not income — though the amounts would start to reduce once an individual earned more than $75,000 a year.

Timothy Jost, a law professor at Washington and Lee University in Virginia and an expert on the Affordable Care Act, said that kind of a tax credit would generally be helpful for young consumers, but not for older, lower-income ones. "For people who are 55 or 60 and earning 150 percent of poverty, they're hopeless," said Jost, a proponent of the Affordable Care Act. "There's no way you can get coverage for the amount (of tax credit) that you'd get."

Proposed changes to Medicaid, a state- and federally-funded health insurance program for the poor and people with disabilities, would include shifting away from the federal match states receive for what they spend. About one-fourth of Illinois residents are covered by Medicaid. The federal government now picks up about half the cost of traditional Medicaid in Illinois.

Instead of a federal match, the House GOP bill would cap the dollars states receive per Medicaid recipient — a move some say could save money but others fear could mean less coverage for people as states grapple with how to pay for the program.

"That really shifts the burden of costs to the states and is going to force them to make some really dangerous decisions about eligibility requirements and care for individuals," said Ramon Gardenhire, a vice president with the AIDS Foundation of Chicago.

Obamacare isn't failing under its own weight

How quickly we forget. It was the Republicans who stripped the funding of insurance company subsidies that were needed to overcome the barriers of entering a new insurance market. Yet the Republicans claim that Obamacare is failing under its own weight. Their proof: There are some or no insurance...

How quickly we forget. It was the Republicans who stripped the funding of insurance company subsidies that were needed to overcome the barriers of entering a new insurance market. Yet the Republicans claim that Obamacare is failing under its own weight. Their proof: There are some or no insurance...

The bill also would allow people who gained coverage through Medicaid expansion — a part of the Affordable Care Act that extended Medicaid coverage to adults who didn't previously qualify — to keep that coverage. But in 2020, the federal government would stop sending additional money to states to enroll new people in Medicaid expansion.

That's good news for those who have long argued that federal and state Medicaid dollars should focus on those who need help most, not able-bodied adults who gained coverage for the first time under Medicaid expansion.

But many of those on the ground in health care in Illinois disagree. About 650,000 Illinois residents are now covered under Medicaid expansion.

"People aren't going to stop being poor in 2020," said Roberta Rakove, a spokeswoman for Chicago's Sinai Health System, where nearly 70 percent of patients are Medicaid recipients. "You're going to get new adults who would have been covered by the Medicaid system before 2020, and they're not going to be eligible."

The bill also scraps the requirement that all Americans purchase insurance or pay a penalty. That requirement has long been deeply unpopular among many conservatives but has been described by Obamacare proponents as necessary in order to make sure enough healthy people buy insurance, to balance out costs for insurance companies.

In place of that requirement, consumers who buy individual insurance would have to pay 30 percent higher insurance premiums for a year if they went without coverage for two months or more during the preceding year.

The new 30 percent penalty is designed to encourage people to stay insured even when healthy.

But Gardenhire, with the AIDS Foundation, said the penalty would hurt many people with chronic diseases who sometimes lose coverage for periods of time when they have to stop working. It would trap them in a cycle in which they would get sick, lose coverage and then not be able to afford coverage again because of the 30-percent penalty, he said.

Planned Parenthood of Illinois doesn't use federal money for abortions, though it does use federal dollars for other services.

Many, however, praised the overall replacement bill on Tuesday, saying it keeps the best parts of the Affordable Care Act while jettisoning the worst.

The bill, for example, would keep some popular provisions of the Affordable Care Act, such as protections for people with pre-existing conditions looking to buy insurance. As of 2015, about 26 percent of Illinois residents had pre-existing conditions that could have affected their ability to get coverage without Obamacare, according to the Henry J. Kaiser Family Foundation.

The GOP plan would also, like the current law, allow young adults to stay on their parents' health insurance until the age of 26.

It would also repeal a number of taxes the Affordable Care Act imposed.