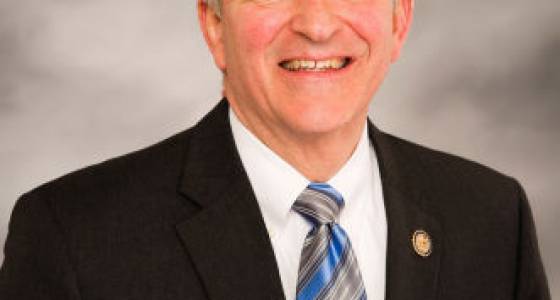 Why didn't our new congressman, Daniel Webster, answer questions from constituents at ribbon cuttings for his offices in Inverness and Brooksville last week?

Why did he allow social media videos to show him mutely wielding cartoonish 4-foot scissors as dozens of voters asked about President Donald Trump and Russia?

Why did he go through the meaningless theatrics of returning his salary to the federal government, complete with the obligatory prop of an oversized check, while questions rained down about Obamacare?

Why did he pass up this great chance to live down the knock against him — that he's an interloper who moved to Florida's safely Republican 11th District not because he cares about the concerns of local voters, but to extend his 35-year career as a state and federal lawmaker?

Because these questions are tough for Webster, a Republican from Clermont, or any lawmaker who supports Trump's policies.

It's not easy to defend the indefensible.

He can repeat on his website, as he has, the claim that Obamacare is collapsing.

It's a lot harder to say that to a constituent who knows that the only way the system will collapse is if Republicans make it happen, or to a questioner who is one of the 20 million people the government says the program has helped insure.

Democratic activist DeeVon Quirolo said Webster looked past her when she approached him after the Brooksville event with a list of concerns, including about the environment.

Of course he did.

He can't really say — not to someone like Quirolo, who knows better — that he approves of complete indifference to global warming when all available evidence shows the world evolving into an oversized cinder.

He can't tell her, with any sincerity, that the restoration of the right of coal companies to clog mountain streams with sludge is a good thing — can't say that it does anything other than give false hope to a dying industry.

He can post a press release on his website praising Trump's ill-conceived moratorium on immigration from seven Muslim countries, a statement that actually dignifies it with its absurd real name: "President Trump's Executive Order Protecting America from Foreign Terrorist Entry."

He'd have a harder time explaining it to people who read real news, who know that the threat of immigrants from the targeted countries is minimal.

It's tough to defend Trump's immigration policies in general as we watch them undermine America's image as a beacon of justice and opportunity — or even as a nice place to take a vacation.

Of course, Webster's office would never acknowledge that he wanted to duck tough questions. It said he had full schedule of meetings with constituents — presumably the kind that don't pester him with policy inquiries — and that the events last week were never imagined as town hall meetings, never as anything more than ribbon cuttings.

Furthermore, the office promised that later in the year Webster will hold "listening sessions" to hear voters' concerns.

He's not saying anything about providing answers.