We know what went wrong on stage. Here's the worst (and best) of the Oscars red carpet

Another year, another red carpet. The fashion at the Academy Awards in Hollywood was a retro rewind. Think throwback silhouette gowns, rich velvet fabrics, romantic lace details and trailing capes. And, of course, jewels.But while there were no fashion gaffes... 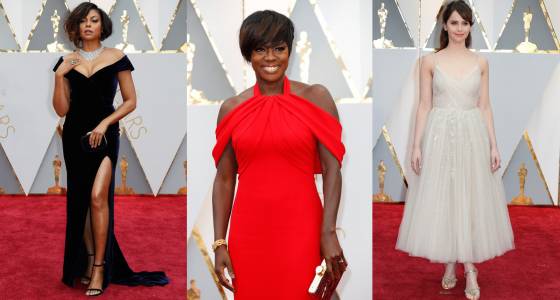 Another year, another red carpet. The fashion at the Academy Awards in Hollywood was a retro rewind. Think throwback silhouette gowns, rich velvet fabrics, romantic lace details and trailing capes. And, of course, jewels.

But while there were no fashion gaffes as big as what happened on stage (Bjork and Cher remain unchallenged there), there were some misses.

Let’s face it: This year the fashion isn’t what most viewers will remember about the evening. But it’s always fun to see.

Here’s who our fashion writers picked for worst and best style of the 2017 Oscars.

Dakota Johnson wore a Gucci champagne satin long-sleeve, high-neck gown with metallic gold high heel shoes and metallic gold clutch. She looked as though she was trying to be a life-sized replica of the golden Oscar statuettes. Dressing like the award was not a winning move. She scored a place on our worst-dressed list.

Jessica Biel wore a Kaufman Franco gown with Tiffany & Co. jewels. The gold metallic camo look is interesting, for sure, but a little too C-3PO's sister for our tastes, which made it one of our least favorite looks of the night.

Scarlett Johansson wore an Alaia dress with an edgy studded black belt. This look is a bit confusing and feels too casual for the Academy Awards. Therefore, Scarlett earned a timeout on our worst-dressed list.

Sofia Boutella’s Chanel looks like a glitter-handled feather duster. And that swept her straight onto our worst-dressed list.

Jamie Dornan wore an Hermes tuxedo, a Cartier watch/cuff links and Tod's shoes. While we like all the individual pieces of the outfit, somehow it didn’t work together, which earned a spot alongside his “50 Shades” costar on our list of least-liked looks of the night.

We like Halle Berry. And we like Versace. But the usually stunning Berry fell as flat as her hair stood high in this Atelier Versace ensemble.

To be kind, maybe Ryan Gosling was simply trying to be on trend and channel a bygone era with this Gucci made-to-order black velvet, shawl lapel, one-button tuxedo, but thanks to the white evening shirt with blue-tipped ruffle details, that bygone era is the high school prom. He'll be spending the rest of the semester on our worst-dressed list.

We wanted to love Hailee Steinfeld's Ralph & Russo dress but thanks to the peculiar grandma's shower curtain vibe and the curious back ruffle, we just couldn't.

Felicity Jones wore Dior and unfortunately missed the mark. The plain-and-simple ballerina look might be perfect for the top of a tween girl's musical jewelry box, but on the Academy Awards red carpet it's a short spin to the worst-dressed list.

Pharrell Williams made an impression wearing Chanel at the Academy Awards, but it wasn't a good one. Did he get in a cat fight on his way to the Oscar’s? His shirt looks shredded? He's on our worst-dressed list.

Viola Davis looked fierce in a custom red Armani Privé vermillion silk gown with a high neckline that falls into draped shoulders and pleated detailing on the bodice.

She blazed her way onto our best-dressed list hours before she went home with the Oscar for supporting actress.

Emma Stone wore a gorgeous embellished Givenchy dress that harks back to the flapper days. Though we are not in love with the color of the dress, we're smitten with everything else about it. And for that, Emma earned gold on our best-dressed list.

Oh, and she brought some home too, with her win for lead actress.

Mahershala Ali was a shoo-in for the best-dressed list thanks to his tone-on-tone Ermenegildo Zegna Couture tuxedo, shirt, bow tie and pocket square -- accessorized with Monique Pean Homme shirt studs.

He took home the statuette for supporting actor.

It's always good to bet on black, and here it paid off for Brie Larson, whose custom strapless, black velvet ruffled gown by Oscar de la Renta earns her a spot on our best-dressed list.

Taraji P. Henson knows how to steal a scene. She wore a custom off-the-shoulder navy velvet Alberta Ferretti gown, dazzling Nirav Modi statement necklace and Jimmy Choo shoes and bag. Henson perfectly captured the retro rewind vibe of the 2017 Oscars red carpet -- and captured a place toward the top of our best-dressed list.

Was that Belle from “Beauty and the Beast?” No, it's her Oscars 2017 doppelganger -- actress Leslie Mann, who shone in a yellow Zac Posen dress, Lorraine Schwartz jewelry and Jimmy Choo clutch and shoes. On anyone else at any other time, we might feel differently, but here she's our guest on the best-dressed list.

Alicia Vikander was a picturesque vision of romance and glamour in Louis Vuitton. Her little black dress made a big statement and catapulted her onto the best-dressed list.

Ruth Negga wore a custom-made red Valentino dress and Irene Neuwirth jewelry. Negga looked like a queen in such a regal ensemble, which is why she reigned on our best-dressed list.