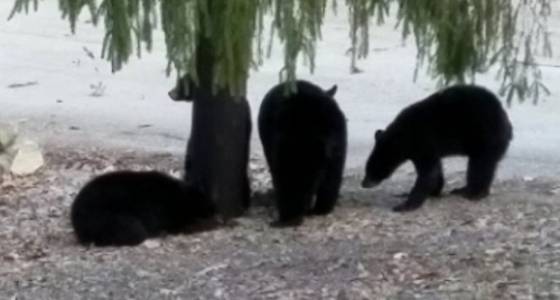 VERNON -- A pack of black bears came out of their winter dens to enjoy the unusually warm weather on Saturday.

Vernon resident Arne Bruhns said he shot a video of a pack of black bears roaming around his front yard around 3 p.m.

He said his kids were outside playing when they spotted the bears from a distance coming down a hill. The kids came inside and about 10 minutes later, Bruhns said, the bears were out on the front lawn.

Black bears in Bruhns' neighborhood is not an uncommon sight, he said. However, this is the first time he's seen bears in February.

Black bears can be active all year long and are not true hibernators, according to the New Jersey Department of Environmental Protection. But they do enter dens in the fall and don't usually come out until spring.

The state has experienced spring-like weather as of lately. On Saturday, highs in Sussex County hovered just below 70.