OAKLAND — Stephen Curry scored 27 points on a night Kevin Durant missed his first game of the season with a hand injury, and the Golden State Warriors beat the Brooklyn Nets 112-95 on Saturday to clinch a playoff berth.Klay Thompson added 24 points. Curry... 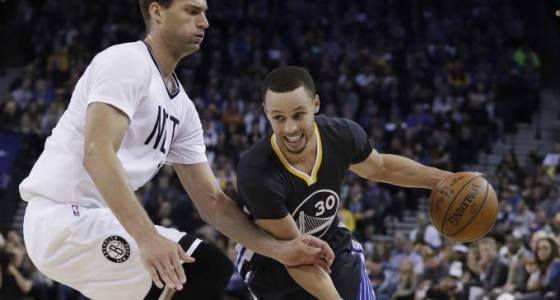 OAKLAND — Stephen Curry scored 27 points on a night Kevin Durant missed his first game of the season with a hand injury, and the Golden State Warriors beat the Brooklyn Nets 112-95 on Saturday to clinch a playoff berth.

Klay Thompson added 24 points. Curry converted a four-point play just before halftime to put his team up 62-51 at the break. The two-time reigning MVP had five 3-pointers and five assists.

This is just a first step for these star-studded, NBA-best Warriors (49-9): They want the No. 1 seed in the West. Oh, and a championship.

Durant sat out with a bruised left hand.

He injured his pinkie in the against the Los Angeles Clippers on Thursday night, and X-rays were negative. He practiced Friday with his left hand heavily taped and still had some discomfort Saturday.

Without KD, Golden State struggled to put the Nets away in the second half despite leading by 19 — a far cry from the Warriors’ 50-point third quarter against the Clippers.

Curry dribbled past Brook Lopez, scored and was fouled for a key three-point play with 2:59 remaining to put the Warriors up 11. He knocked down a 3 the next time down.

Rookie Patrick McCaw started in place of Durant and finished with nine points and two blocked shots in his fourth career start, while Andre Iguodala had a season-high nine assists.

Draymond Green reached 500 career steals and had at least one for a 17th consecutive game to match a career-best streak. He has 20 over his last six games.

Brooklyn’s Jeremy Lin started for the second consecutive night after missing the previous 26 games because of a strained left hamstring and scored nine points. The Nets haven’t won since Jan. 20 at New Orleans. They hung tough with the league’s top team while playing the second game of a back-to-back after losing at Denver on Friday night.

JaVale McGee, who was ripped on, called a bum and threatened by Hall of Famer Shaquille O’Neal in a Twitter spat after Thursday night’s game, had seven points and nine rebounds off the bench.

Nets: F Caris LeVert was sidelined feeling ill. ... Brooklyn is 2-8 on the road vs. the Western Conference. ... The Nets are winless in February, 0-3 on the road.

Warriors: Coach Steve Kerr said Golden State will not re-sign Briante Weber following the expiration of his second 10-day contract. The Warriors had to make a decision by Sunday. ... Golden State is 10-0 at home vs. the Eastern Conference. ... Durant, averaging 25.7 points, 8.4 rebounds and 4.9 assists in his first year with Golden State, missed his first game of the season. But Kerr is being cautious with all of his players given an upcoming stretch with eight games in 13 days that includes a cross-country trip, a return to the Bay Area for one game then back-to-back games at Minnesota and San Antonio on March 10-11.