HOLLYWOOD >> Despite PricewaterhouseCoopers taking full responsibility for the gaffe that caused Warren Beatty and Faye Dunaway to announce the wrong winner of the Oscar for best picture, Beatty called Tuesday for the Academy of Motion Picture Arts... 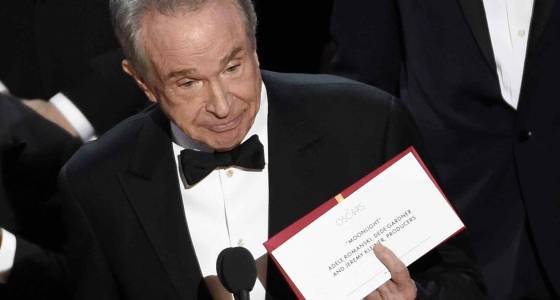 HOLLYWOOD >> Despite PricewaterhouseCoopers taking full responsibility for the gaffe that caused Warren Beatty and Faye Dunaway to announce the wrong winner of the Oscar for best picture, Beatty called Tuesday for the Academy of Motion Picture Arts and Sciences to “publicly clarify” what happened.

Apparently growing tired of the continuing questions about the Sunday night snafu that saw “La La Land” mistakenly being proclaimed best picture, when “Moonlight” had actually won, Beatty issued a statement to The Associated Press and other media outlets saying the inquiries shouldn’t be directed at him.

“Rather than for me to respond to questions from the press about the Academy ceremony, I feel it would be more appropriate for the president of the Academy, Cheryl Boone Isaacs, to publicly clarify what happened as soon as possible,” according to the 79-year-old Beatty.

The Academy issued a statement of its own Monday night, apologizing to Beatty, Dunaway and the cast and crew of both films involved in the gaffe.

PricewaterhouseCoopers, the accounting firm that has handled Oscar-ballot-tabulation duties for more than eight decades, has laid blame for the mistake squarely on the shoulders of one if its partners, Brian Cullinan, saying he “mistakenly handed the back-up envelope for Actress in a Leading Role instead of the envelope for Best Picture” to Beatty and Dunaway.

Two sets of envelopes are prepared for the ceremony, so PwC officials can hand them to the presenters regardless of which side of the Dolby Theatre stage they enter -- resulting in the duplicate that was mistakenly handed to Beatty.

The best actress Oscar had been presented moments earlier to Emma Stone of “La La Land.” The envelope that Beatty opened on stage thus had Stone’s name on it, along with the name of the film, which Dunaway announced as winner of the best picture Oscar.

“La La Land” producers were in the midst of their acceptance speeches when the mistake was pointed out, and the honor was then presented to “Moonlight” in one of Oscar’s most chaotic moments ever.

“Once the error occurred, protocols for correcting it were not followed through quickly enough by Mr. Cullinan or his partner,” according to a statement by PricewaterhouseCoopers. “We are deeply sorry for the disappointment suffered by the cast and crew of ‘La La Land’ and ‘Moonlight.’ We sincerely apologize to Warren Beatty, Faye Dunaway, Jimmy Kimmel, ABC and the Academy, none of whom was at fault for (Sunday) night’s errors. We wish to extend our deepest gratitude to each of them for the graciousness they displayed during such a difficult moment.”

Various media reports have suggested that Cullinan made a series of Twitter posts during the Oscar ceremony while he was working backstage. He allegedly snapped a photo of Stone walking off stage with her Oscar and posted it on Twitter, but the post has since been deleted.

Such a photo would have been taken roughly around the time Beatty was preparing to walk on stage, but it’s unclear if it may have played a role in the envelope mix-up.

“For the past 83 years, the Academy has entrusted PwC with the integrity of the awards process during the ceremony, and (Sunday) night we failed the Academy,” according to the accounting firm.

Academy officials, in their statement, did not provide an indication of whether PricewaterhouseCoopers might be in danger of being replaced.

“For the last 83 years, the Academy has entrusted PwC to handle the critical tabulation process, including the accurate delivery of results,” according to the Academy’s Monday night statement. “PwC has taken full responsibility for the breaches of established protocols that took place during the ceremony. We have spent last night and today investigating the circumstances, and will determine what actions are appropriate going forward. We are unwaveringly committed to upholding the integrity of the Oscars and the Academy of Motion Picture Arts and Sciences.”