Want to get to Europe on the cheap? Try Norwegian Air's LowFare

Norwegian Air's LowFare ticket option has allowed me to fly across the pond for less than I could fly across the country — without sacrificing comfort, quality or service.8 Months Ago5 Months AgoYou'll have to drive a little. The airline flies out of... 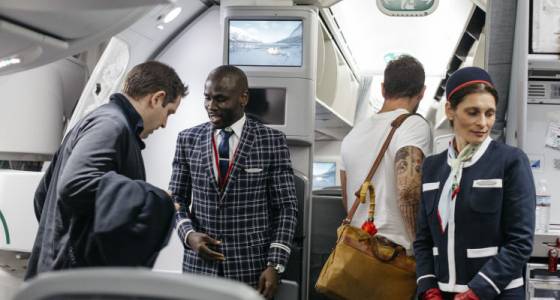 Norwegian Air's LowFare ticket option has allowed me to fly across the pond for less than I could fly across the country — without sacrificing comfort, quality or service.

You'll have to drive a little. The airline flies out of just two Florida airports: Orlando International (MCO) and Fort Lauderdale-Hollywood International (FLL).

And you may fly to cities you might not have thought to visit (Oslo, Norway, and Copenhagen, Denmark, for example) — direct in some cases — but they're lovely cities. They also are great jumping-off points to catch cheap flights to other European destinations.

My recent score: round-trip, nonstop tickets from Fort Lauderdale-Hollywood International to Oslo for $304 — total — per person. My daughters graduate from high school in May, so I'm taking them to Europe. (It will be our second trip together on Norwegian.)

You'll have to keep an eye on the website ( norwegian.com/us), and you may need to exercise flexibility when it comes to travel dates, but deals can be had. The other flights I've taken to Europe, round-trip flights on a major U.S. carrier — all with stops — ran at least $1,000. Thankfully, I had airline reward miles.

If you're like me, when you hear "low-cost airline," your imagination runs wild.

In fact, Norwegian Air was named "World's Best Long Haul Low-Cost Airline" and "Best Low-Cost Airline in Europe" in the 2016 Skytrax World Airline Awards, based on a survey of millions of airline passengers.

Our first Norwegian Air flight, from Orlando to Copenhagen in 2015, was on a Boeing 787 Dreamliner.

The plane had lots of bells and whistles, including a fresh air system said to remove even perfume particles, an ambient lighting system and an electrochromatic-dimming system — no more pulling down the window shade. It also had seats that were more than ample with touch screens built into the backs offering an assortment of movies, TV shows and games — for free.

There are some caveats when it comes to the LowFare, and nonrefundable, ticket. It does not include a checked bag. (You can pack lightly: a small carryon to stow overhead and a bag that will fit under the seat in front of you.) It also does not include food, drinks or a seat assignment. (When you're hungry or thirsty, select "snack bar" on the touch screen, make your choices and swipe your debit card or credit card in a slot at the bottom. A flight attendant will deliver your order.)

If the LowFare ticket isn't for you, there are other fare options on Norwegian. The prices are higher but more things are included.

As for those cities I, too, had not thought to visit? I'm glad I did, and I will return to both.

There is much to do and see in Norway's capital, from Edvard Munch's famous Scream painting at the National Gallery, to the Viking Ship Museum, the Ibsen Museum, the Norwegian Maritime Museum and the Nobel Peace Center. And that's barely scratching the surface. The Oslo Pass is an economical way to see the most popular sites. It includes entry to nearly three dozen museums and attractions, use of public transportation, walking tours, discounts on dining and more. A 24-hour pass costs 395 Norwegian krone (about $47). Also available: 48-hour and 72-hour passes. Information: visitoslo.com. The pass also will get you a discount to see the waterfront city from another angle, on a sightseeing excursion on the inner Oslo Fjord.

Our time in Denmark's capital was very limited, as was daylight. We visited Fisketorvet — Copenhagen Mall (architecturally and aesthetically pleasing, with artwork throughout, including hundreds of metal fish circling in a school overhead) and Tivoli Gardens amusement park. We capped off our Tivoli trip with a ride on the Flying Trunk, a journey through the fairy tales of Danish author Hans Christian Andersen. A nice 20-something man running one of the game booths at the park recommended it. When I asked him why — in bracing cold and high winds — he seemed to be so happy, he said, "Hygge," and explained the Scandinavian concept, which loosely means "coziness" and is more or less a state of mind. We thanked him, and as we said goodbye and turned to head to the ride he stopped us. Even though we hadn't played his game, he wanted to give us "prizes." They were Hans Christian Andersen key chains.