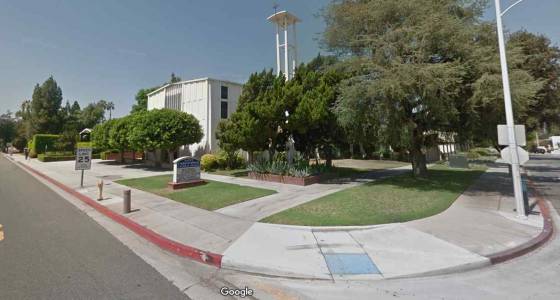 WEST COVINA >> Police are looking for the man they believe vandalized two churches early Saturday with spray-painted Bible verses and other phrases.

Surveillance video from St. Christopher Catholic Church, 629. S Glendora Ave., showed a man in dark clothing, a mask and a hooded sweatshirt spray painting windows, statues and pavement at around 4 a.m. on Saturday.

“Unfortunately the person’s face is not visible,” Cpl. Rudy Lopez said. “It’s a long shot if anyone can ID the person.”

While on patrol Monday to check on other churches in the city, officers also found a sign with similar graffiti in front of West Covina Christian Church, 1100 E Cameron Ave., Lopez said.

Police have no further details on the second incident, Lt. David Lee said.

Detectives are still gathering information on both cases to see if there is a link between them, Lee said. He called the graffiti incidents “unusual.”

Anyone with information on either incident has been asked to call the West Covina Police Department at 626 939-8557. Tips may be left anonymously.