URBANA, Ill. -- University of Illinois veterans have organized a clothing drive for victims of a fire in Danville that killed one veteran and displaced others.David R. Singleton, 75, was killed in the fire at a veterans' group home Feb. 2, The News-Gazette... 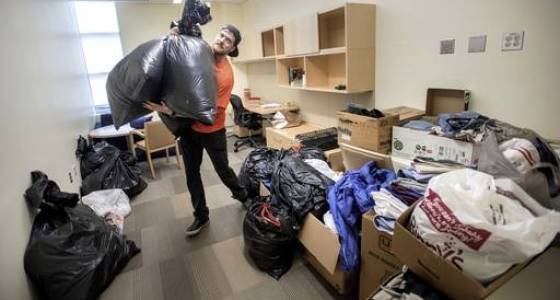 URBANA, Ill. -- University of Illinois veterans have organized a clothing drive for victims of a fire in Danville that killed one veteran and displaced others.

University of Illinois student and Marine veteran Jason Sakowski contacted Veterans Affairs officials at the Illiana Health Care campus in Danville to ask what the Illini Veterans could do to help.

"Everyone's wheels got turning, and we got things happening," said Brent Blackwell, a U.S. Army veteran who's also a UI student and a member of Illini Veterans.

The group placed collection bins at the university's Center for Wounded Veterans. Over the next few weeks, they collected more than a dozen boxes and large garbage bags of clothing and shoes to distribute to the veterans in need.

The Illini Veterans also donated several gift cards for the veterans affected by the fire.

"I'm proud that the community responded so well," Sakowski said. "It was a good feeling to have an impact on something directly."

Blackwell said it's a reminder that service to others doesn't take a huge effort some times.

"Service doesn't have to be hard," he said.

Jennifer Sheehan-Wells, voluntary services specialist at the VA in Danville, picked up the donations Thursday.

"It's amazing," she said of the donations and Illini Veterans' efforts. "It's honestly a huge blessing. We're so grateful they saw a need and reached out to help."

Information from: The News-Gazette, http://www.news-gazette.com