CaptionCloseAlbanyWhen Rifat Filkins came to the United States from Pakistan in 2009 to join the Refugee and Immigrant Support Services of Emmaus she didn't speak English."Although I had a lot of experience, a lot of educational background ... when you... 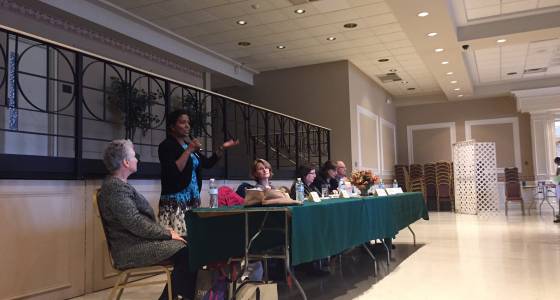 When Rifat Filkins came to the United States from Pakistan in 2009 to join the Refugee and Immigrant Support Services of Emmaus she didn't speak English.

"Although I had a lot of experience, a lot of educational background ... when you come over here, language is the biggest barrier," Filkins said. "And it takes a very long time for adults to overcome that barrier, and sometimes it just never goes away."

Filkins, who is executive director of the nonprofit that teaches English to non-natives, shared her experience working with refugees and immigrants in the Capital Region as part of a public forum Sunday on immigration sponsored by the League of Women Voters of Albany County.

She as well as individuals from the U.S. Committee for Refugees and Immigrants, Capital District Coalition Against Islamophobia, Center for Women in Government and Civil Society and the Capital Region Refugee Roundtable discussed what their organizations offer, answered questions from the crowd and encouraged others to get involved.

"We can't do whatever we are doing without volunteers," Filkins said. "We all can make this world a better place by helping each other."

Kathleen Hidalgo talked about her volunteer work at the U.S. Committee for Refugees and Immigrants to the roughly 100 people who attended the forum held at St. Sophia Church in Albany.

"I want you to understand the joy that I have gotten from working with refugees is unbelievable," she said. "You become part of their family; they become your heart."

Tensions have mounted over refugees and immigrants coming to the U.S., with President Donald Trump calling for a halt in immigration from seven Muslim-majority countries. While the measure has been blocked in court, Trump is considering a different draft.

Isabelle Thacker, a staff attorney for the U.S. Committee for Refugees and Immigrants, said Trump also reduced the number of refugees allowed to enter the U.S. nationwide from 110,000 to 50,000. The nonprofit organization assists in resettlement, helping families find housing and jobs and providing guidance on financial management.

But while federal measures have caused concern among refugees and Muslim citizens, the Capital Region has been welcoming, said Steve Downs, of the Capital District Coalition Against Islamophobia.

While Downs recognized that some individuals fear terrorists may be among refugees resettling, he said the chances are small.

"You have much more chance of being killed by your furniture falling on you than you do a terrorist attack," he said. "This is a fear that is completely unjustified. It is not based on facts at all, and we should reject it every time the argument is made that somehow we are in danger because people are coming into the country as immigrants or refugees."