A U.N. panel said Wednesday the evacuation of eastern Aleppo, immediately after months of siege and aerial bombing by Russian and Syrian forces, was 1 of a lot of war crimes committed by those fighting for manage of the city. The findings came amid open-ended... 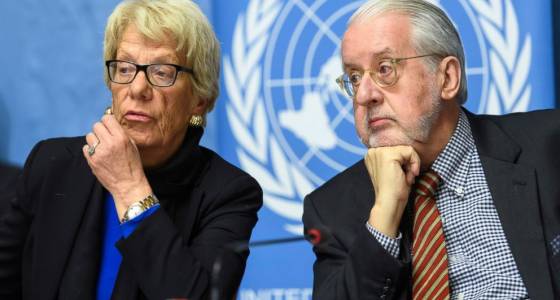 A U.N. panel said Wednesday the evacuation of eastern Aleppo, immediately after months of siege and aerial bombing by Russian and Syrian forces, was 1 of a lot of war crimes committed by those fighting for manage of the city.

The findings came amid open-ended peace talks mediated by a U.N. envoy, and could bolster opposition demands for a political transition in which Syrian President Bashar Assad would cede energy — a thing the government has adamantly rejected.

But in a sign of moderate progress, just after pretty much a week of meetings, the sides appear to have signed off on the agenda proposed by U.N. Syrian envoy Staffan de Mistura: separate "baskets" of subjects covering the problems of governance, elections and constitutions.

Russian Deputy Foreign Minister Gennady Gatilov told reporters in Geneva that "the parties have agreed to ... talk about all problems in a parallel way, on a number of tracks." Just after a Damascus request, the situation of terrorism, is also on the table, he mentioned.

The official Syrian news agency SANA mentioned the government delegation had held "deep" and "fruitful" discussions over the "simple principles" for the political option in Syria and succeeded in incorporating terrorism as a subject of discussion.

De Mistura held back-to-back meetings with the government delegation and the key Syrian opposition Wednesday. He seemed in excellent spirits, but declined to comment on whether or not all sides had agreed on his agenda.

"We will see in the subsequent two days," he told The Connected Press.

Additional talks are scheduled for Thursday.

Meanwhile, Yahya Kadamani, a prominent member of the biggest opposition mission in Geneva, said his delegation had a "optimistic" meeting with the Russian minister. Opposition delegates, he mentioned, applied the meeting to push Moscow for a change of method in Syria.

Earlier in the day, the Commission of Inquiry on Syria unveiled a report searching at violations by all parties in last year's battle for Aleppo, such as indiscriminate bombing of civilian areas, and the use of chemical agents and cluster munitions. A stinging bombing campaign by the Russia and Syrian air force, coupled with the denial of humanitarian aid, drove rebels in the city to finally surrender.

"The scale of what occurred in Aleppo is unprecedented in the Syrian conflict," mentioned the commission's chairman, Paulo Pinheiro.

Aleppo was the financial capital of Syria just before becoming a key battleground after rebels swept in through the summer season of 2012. For Assad, the capture of eastern Aleppo in December was a huge victory and shifted the military balance in his favor.

The agreement to evacuate rebel-held eastern Aleppo gave civilians no choice to remain at the finish of the protracted campaign, in which daily aerial bombings killed hundreds of individuals and left all the hospitals in the area out of service.

The commission stated the situations of the agreement amounted to "the war crime of forced displacement."

The report looked at violations committed amongst July 21, when the siege of rebel-held element of Aleppo began, and Dec. 22, when Syrian troops and allied forces assumed full handle of the city.

It drew on the testimony of 291 eyewitnesses, satellite imagery and an array of material, including health-related reports, forensic proof and data provided by U.N. member states.

"For months, the Syrian and Russian air forces relentlessly bombarded eastern Aleppo city as element of a technique to force surrender," Pinheiro mentioned. "The deliberate targeting of civilians has resulted in the immense loss of human life, which includes hundreds of kids."

The commission stated it was frequently hard to know whether or not precise strikes had been carried out by Russia or the Syrian government. But it mentioned it had determined that Syrian warplanes targeted hospitals on at least two occasions, and deliberately attacked a humanitarian help convoy on Sept. 19. It also identified evidence that the Syrian government had utilized prohibited cluster munitions.

Both sides carried out indiscriminate attacks in densely populated civilian regions, it stated, adding that rebels had launched imprecise mortar attacks on government-held neighborhoods. As defeat was near, some rebels shot civilians to prevent them from leaving and utilised them as human shields, although government forces forcibly conscripted 200 men.

Pinheiro said the commission's investigators are ready to share their list of suspects with a recently established U.N. panel tasked with developing circumstances toward the prosecution of these accountable for war crimes or crimes against humanity in Syria.

British Foreign Office, which backed the resolution, stated the U.N. report underscores the "urgent will need to strengthen the present cease-fire to prevent extra innocent civilians enduring the same suffering as those in Aleppo."

A Western diplomat in Switzerland, meanwhile, stated the most current talks — dubbed Geneva IV — marked an improvement on preceding inconclusive rounds. The diplomat, who was not authorized to speak to reporters, spoke on condition of anonymity.

The talks seek to capitalize on a cease-fire agreement brokered by Russia and Turkey right after the evacuation of eastern Aleppo, but fighting is still underway in different parts of the nation.

Pro-government forces have seized the citadel in Palmyra, about a mile away from the town's famed archaeological internet site, according to media operated by the Lebanese Hezbollah group, which is fighting alongside Syrian government forces.

The Islamic State group seized Palmyra in December, months just after being driven out by Russian-backed Syrian forces.

In Damascus, government forces pressed on with their offensive to seize the Barzeh and Qaboun neighborhoods from the opposition, the activist-run Qasioun News Agency and the Britain-based Syrian Observatory for Human Rights stated.

Pro-government forces targeted the region with roughly 18 surface-to-surface missiles Wednesday, according to the Observatory, which said about a dozen Syrian troops and allied militia members had been killed during clashes in the eastern suburbs of Damascus more than the previous 24 hours.

The Barzeh, Qaboun, and Tishreen neighborhoods are one of final two footholds of the opposition in the capital.