Three Elgin Area School District U-46 board members want to revisit the district's policy for allowing transgender students access to restrooms and locker rooms based on their gender identities, but the idea was dismissed by a board majority.Citing President... 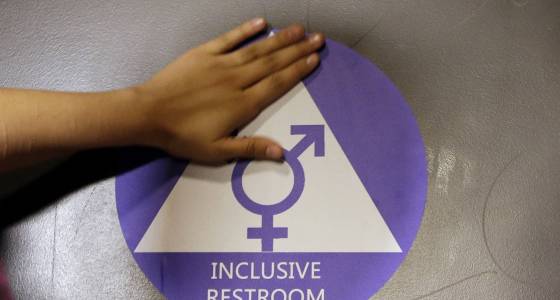 Three Elgin Area School District U-46 board members want to revisit the district's policy for allowing transgender students access to restrooms and locker rooms based on their gender identities, but the idea was dismissed by a board majority.

Citing President Donald Trump's reversal of federal guidelines on the matter, school board member Jeanette Ward said Monday that the district should reconsider allowing transgender students access to restrooms and locker rooms not corresponding with their biological sex.

As of Sept. 6, the district agreed to allow transgender middle school students to use the locker rooms and restrooms corresponding with their gender identity. The number of transgender students among the district's more than 40,000 students is unknown.

"If a gender dysphoric boy is not comfortable sharing private spaces with peers of his same sex he may access opposite sex facilities, but if girls are not comfortable sharing private spaces with a boy they must use single-occupancy staff restrooms," Ward said. "Since Obama's unconstitutional 'Dear colleague' letter can no longer be used to justify allowing de facto coed restrooms and locker rooms, I would like to see us craft a policy that protects the privacy and safety of all students.

"These were not guidelines. They were a threat to pull federal funding from our school district that would have took resources out of the classroom from our students," Holt said. "It's also an encroachment from the federal government into local affairs in a local school district, and we are no longer under that threat."

Board member Veronica Noland rejected Ward's argument and the notion that there is a critical transgender issue that needs addressing.

"I object to the term 'gender dysphoric,'" she said. "It is an antiquated term, just as lesbians and bisexuals were called a disorder in the past. This is no different. This is an evolution. And we need to stop this type of discrimination that my colleague is trying to perpetuate."

Noland said the district's policy already was in place before Obama's directive came down.

"The law is already clear," Noland said. "We didn't need that guidance, because we were already doing it and we continue to do it ... on a case-by-case basis, we meet the needs of these students who are transgender. They deserve our protection. They are not abnormal. They are not dysphoric. Just as we accept lesbians and gays, we need to accept transgender students."

Board member Traci O'Neal Ellis said until the U.S. Supreme Court rules on the transgender access issue, "none of us know what's unconstitutional."

"I stand behind our anti-discrimination policy," she added. "There is no need to revisit it."