Two people were rescued from the wreckage of a small airplane that crashed Monday morning into Culver Reservoir, near Berthoud, in Larimer County.Single engine plane went down into Culver Reservoir this morning. Call came in at approximately 7:45 pic.twitter.com/4721nCqq1F—... 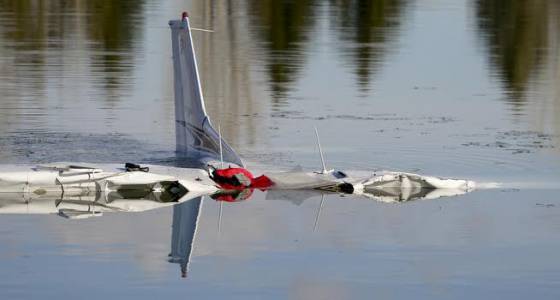 Two people were rescued from the wreckage of a small airplane that crashed Monday morning into Culver Reservoir, near Berthoud, in Larimer County.

Single engine plane went down into Culver Reservoir this morning. Call came in at approximately 7:45 pic.twitter.com/4721nCqq1F

Deb Graves, of the Berthoud Fire Protection District, says the crash was reported at about 7:45 a.m. She said divers rescued the pair - or "extricated" them - from the plane.

The two people were taken to a hospital by ambulance. Graves said she didn't have further information on their condition.

The Federal Aviation Administration said he didn't know where the plane - a Cessna 172 - took off from or was heading.

FAA spokesman Allen Kenitzer said the crash happened under "unknown circumstances" and that local authorities report only two people were aboard.

"This is all of the information we have at this time," Kenitzer said.

The FAA and National Transportation Safety Board will investigate.

Television news helicopter images from the scene showed what appeared to be divers inspecting the small aircraft's partially submerged wreckage, which was near the reservoir's shore.

Further information on the situation was not immediately released.