The Twins announced this morning that outfielder Alex Kirilloff, their first round draft pick from last year, will miss the 2017 season because of a torn ligament in his left elbow.Kirilloff will have Tommy John surgery on March 8, and it will be preformed... 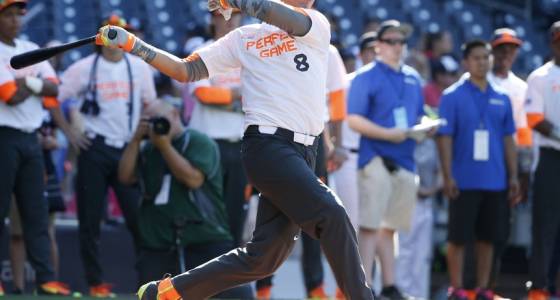 The Twins announced this morning that outfielder Alex Kirilloff, their first round draft pick from last year, will miss the 2017 season because of a torn ligament in his left elbow.

Kirilloff will have Tommy John surgery on March 8, and it will be preformed by noted surgeon Dr. David Altchek, who is based in New York. Altchek has done Tommy John surgeries on Kyle Gibson, Scott Baker, Joe Nathan and Miguel Sano.

In fact, this is three years to the day that we were writing about Sano's surgery.

According to GM Thad Levine, Kirilloff left an Aug. 28 game because of a sore elbow. He was examined by Twins physician Dr. Steubs, and the decision was made to try a platelet-rich-plasma injection. Kirilloff reported to camp recently complaining of the same soreness. Another MRI exam was taken which revealed the tear and surgery was recommended.

PRP injections have been on the rise lately as an attempt to heal injuries and avoid surgeries. It hasn't worked in some cases, but Yankees pitcher Masahiro Tanaka tried PRP in 2014 and came back in 10 weeks. And everyone is watching the comeback of Angels pitcher Garret Richards, who had stem cells removed the bone marrow in his pelvis and injected into his elbow in an effort to avoid surgery.

These alternative procedures allow players to return sooner, but it's 50-50 if they work. Kirilloff tried it, and it didn't work out.

Kirilloff batted .306 in 55 games for rookie league Elizabethton, Tenn. with seven homers and 33 RBI. His promising start had him ranked as the third best prospect in the organization by Baseball America.

That's the news so far today. The Twins will try to score runs and not give up 19 - which happened yesterday - when they play host to Pittsburgh today. Joe Mauer makes his spring debut and is batting second. Brian Dozier is batting third. He asked me what I thought of his spot in the order. I told him he's a fit for first, second or third. Dozier really likes batting leadoff and ambushing teams. We'll see what the lineup looks like this year. I think it will vary from day to day.

BYUNGHO Park is batting fourth. Korean TV is in the clubhouse today. Amazing what a couple home runs do for a guy.

Kyle Gibson is on the mound today. He's followed by Ryan Vogelsong, Craig Breslow, Stephen Gonsalves, Aaron Slegers, Felix Jorge and Fernando Romero. Gibson will be looking to push his pitch count to 45, so I'm skeptical about there being innings for Romero to get into the game. But he's worth watching or listening to the radio about - 97-98 mph easy.