SUNRISE, Fla. -- There's a reason Craig Anderson is often at his best when he faces his former team.Kyle Turris scored the tiebreaking goal in the second period and Anderson stopped 37 shots to lift the Ottawa Senators over the Florida Panthers 2-1 on Sunday... 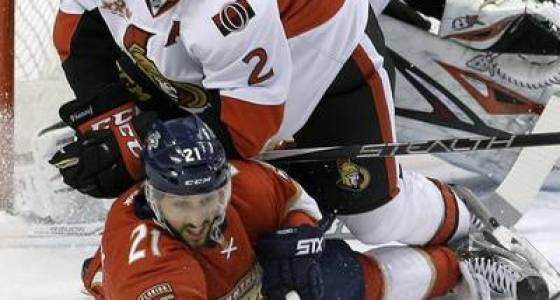 SUNRISE, Fla. -- There's a reason Craig Anderson is often at his best when he faces his former team.

Kyle Turris scored the tiebreaking goal in the second period and Anderson stopped 37 shots to lift the Ottawa Senators over the Florida Panthers 2-1 on Sunday night.

"This has always been kind of home for me. It's a little more emotional for me when I play here," he said. "You seem to get up for those types of games when you have friends and family in the stands."

Anderson was coming off a 3-0 loss to the Carolina Hurricanes on Friday.

"You just have to get back on that horse and start riding it again," he said. "If you have a bad memory I think it works to your benefit."

Zack Smith scored an early short-handed goal for the Senators, who have won four of six. Erik Karlsson had two assists.

"Andy is an outstanding No. 1 goalie," Ottawa coach Guy Boucher said. "We missed him for a long time. You saw what a difference his experience made tonight."

Jonathan Marchessault scored for Florida, and James Reimer made 31 saves. The Panthers have lost three straight after sweeping a five-game road trip, and dropped their last four home games overall.

The Panthers, fifth in the Atlantic Division, trail the second-place Senators by six points and missed a chance to gain ground.

"This was a four-point game right here," Marchessault said.

Turris put Ottawa ahead when his wrist shot went over Reimer's glove at 9:58 of the second for his 21st goal of the season.

"We're right in the race with Ottawa right now," Florida center Aleksander Barkov said. "We need to win these close games. We played well but that's not enough."

The Senators took a 1-0 lead on the short-handed goal by Smith. Reimer blocked a shot from Karlsson, but Smith grabbed the rebound and poked in the puck at 6:28 of the first. Smith has 12 career short-handed goals.

"It was just a great play off the pass. It was right on my stick," Smith said. "It was nice to get one short-handed and get a little momentum."

Marchessault tied it on his power-play goal with 2:47 left in the first. He took a feed from Jonathan Huberdeau in the left circle and put the puck high into the net.

NOTES: Panthers forward Denis Malgin was recalled from Springfield of the AHL. ... Huberdeau has 10 points in 10 games. ... C Greg McKegg was placed on waivers. ... Senators forwards Mark Stone, who leads the team with 22 goals, and Mike Hoffman returned to the lineup. ... Phil Varone and Michael Blunden were recalled from Binghamton of the AHL.