TTC taking all streetcars off Queen St. for the summer | Toronto Star

For the first time in the TTC’s history, there will be no streetcar service on Queen St. this summer.The transit agency is removing streetcars from its iconic 501 Queen route from May until September because of multiple construction projects scheduled... 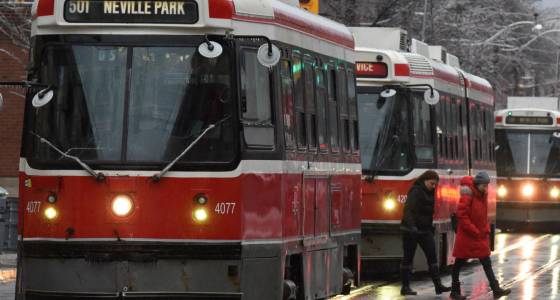 For the first time in the TTC’s history, there will be no streetcar service on Queen St. this summer.

The transit agency is removing streetcars from its iconic 501 Queen route from May until September because of multiple construction projects scheduled for this year, the Star has learned. The 501’s 43,000 daily riders will be put on buses instead.

According to Green, the construction projects that will force the streetcars off of Queen include: ongoing TTC track work on the Queensway, the Humber Loop, and Lakeshore Blvd. West.; city work on the Queensway bridge; sidewalk replacement between Spadina Ave. and Bathurst St.; city water and TTC track work at Queen St. East and Coxwell Ave.; and the replacement of the Eaton Centre overhead footpath, which will require streetcar cables to come down.

“It just sort of made sense to put buses right along the entire route as opposed to having people get on buses, diverting them, having them get back on a streetcar,” said Green.

The 501 is the city’s sixth busiest surface transit route, and its third busiest streetcar line, behind the 504 King and 510 Spadina. Stretching more than 24 km from the Long Branch Loop in Etobicoke to the Neville Park Loop in the Beaches, it has been described as the longest streetcar route in North America. The TTC will require 65 buses to replace existing streetcar service.

The TTC has operated streetcars on Queen since the transit agency’s inception in 1921. But trolleys trundled down the road even earlier than that, in the days of the historic Toronto Railway Company, the TTC’s predecessor.

Streetcars will return to most of Queen St. in September. The 501 west of Roncesvalles will continue to operate with buses, due to the track and bridge work that started in January.

The removal of the streetcars isn’t the only change coming to the 501 in the coming months.

Between March 26 and when the buses take over in May, streetcars will divert via Spadina, King St. West, and Shaw St. to make way for sidewalk construction between Spadina and Bathurst.

The TTC scheduled the same diversion between May and October of last year to allow the city to conduct water main replacement. Riders were frustrated when the detour was extended into December, after the project took longer than expected.

Councillor Mike Layton, whose ward covers part of the diversion route, said that while the detour may be frustrating, there was little the city could have done to avoid repeating it this year.

He said that contractors performing work on two different projects can’t be on the street at the same time, meaning workers had to return this year for the sidewalk project.

“Unfortunately this is one of the realities of living in a city like this,” said Layton (Ward 19, Trinity-Spadina). “We do our very best to co-ordinate the work so that it’s done in a sequence of events that has the least possible disruption ... and I think that’s what we’re trying to do.”