Trump to visit Catholic school in Orlando on Friday

President Donald Trump is set to visit a Catholic school in Orlando on Friday, according to the White House.Trump will attend a "listening session on school choice" at St. Andrew Catholic School in the Pine Hills neighborhood, said Sarah Sanders,... 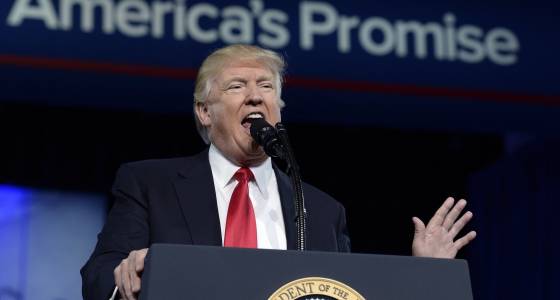 President Donald Trump is set to visit a Catholic school in Orlando on Friday, according to the White House.

Friday’s session will likely focus on the Florida Tax Credit scholarship, said Jon East, a spokesman for Step Up For Students, a non-profit organization that administers the program.  St. Andrew serves 295 students on the scholarship, which is awarded to students from low-income families.

Across the state, 97,926 students receive the scholarship.

East said Friday’s session could provide “a window into what school choice can mean broadly.”

St. Andrew serves students in preschool through eighth grade. Students there are predominantly black and come from low-income families, East said. The school was awarded the U.S. Department of Education’s Blue Ribbon of Excellence award in 2009.

The website says, “Our goals are simple: College and heaven.”

Started in 2002, the tax credit program allows businesses to bypass state coffers and funnel the tax money they owe to private schools, including many religious ones. The scholarship provides up to $5,886 per student annually.

In the ZIP codes where St. Andrew is located and one directly adjacent, a total of 1,209 students receive the tax credit scholarship, one of the largest concentrations in the state.

Central Florida has been a popular destination for Trump.

His one rally in Florida during his post-election “Thank You Tour” was at the Central Florida Fairgrounds in Orlando, despite Orange County going overwhelmingly for Hillary Clinton in the November election.

Trump flew Air Force One from Palm Beach to Melbourne and back on Feb. 18, pulling up to a hangar holding 9,000 people.

Trump is visiting Orlando on his way to his resort Mar-a-Lago in Palm Beach, where he will be spending his fourth weekend since taking office in January.

Brian Bennett of the Los Angeles Times Washington bureau contributed to this report.