WASHINGTON — President Donald Trump will issue a broad call for overhauling the nation's health care system and revving up the U.S. economy when he delivers his first address to Congress Tuesday night. But he could leave anxious lawmakers with few specific... 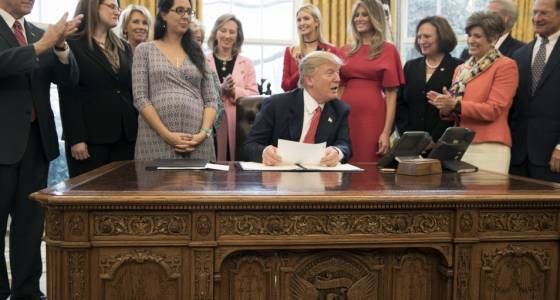 WASHINGTON — President Donald Trump will issue a broad call for overhauling the nation's health care system and revving up the U.S. economy when he delivers his first address to Congress Tuesday night. But he could leave anxious lawmakers with few specific guidelines for tackling the complicated legislative priorities that have divided his own Republican Party.

In one surprise, Trump may also voice support for immigration legislation, a senior administration official said ahead of the address. During a traditional pre-speech lunch with news anchors, Trump said he was open to a "compromise" bill that could include legalization for some of the millions of people living in the U.S. illegally and a pathway to citizenship for the "Dreamers" — people brought to the U.S. illegally as children. A person with knowledge of the meeting confirmed Trump's comments on the condition of anonymity in order to reveal the private discussion.

Trump, who spent much of his election campaign railing against illegal immigration, has condemned previous legislative efforts that included a path to citizenship as amounting to amnesty.

The White House would not expand on Trump's comments beyond spokeswoman Sarah Sanders saying that the president was "open to having conversations about that moving forward."

Trump's address comes at a pivotal moment for a new president elected on pledges to swiftly shake up Washington and follow through on the failed promises of career politicians.

The president spent his opening weeks in office flexing his executive power but has yet to push into the complex legislative battles over health care and tax reform. The White House bungled the rollout of a sweeping immigration and refugee ban and has been plagued by persistent questions about Trump campaign advisers' contacts with Russia during the election. The president has picked fights with the media and the intelligence community, blaming agencies he now oversees for leaking classified information that put him in a negative light.

Trump's turbulent start has left him saddled with historically low approval ratings for a new president. Just 44 percent of Americans approve of his job performance, according to a new NBC News/Wall Street Journal survey.

Trump advisers say parts of Tuesday's prime-time speech will amount to a defense of his early actions. He's expected to tout his decisions to withdraw the U.S. from a sweeping Pacific Rim trade pact and to order the government to start working on a wall along the U.S.-Mexico border.

Republicans, impatient to begin making headway on legislation, hope Trump arrives on Capitol Hill armed with specifics on replacing the "Obamacare" health care law and overhauling the nation's tax system, two issues he's so far talked about in mostly general terms. GOP lawmakers want to act on both this year but are divided over how to proceed.

More broadly, some Republicans are anxious for the president to set aside his feuds with the media, the intelligence community and the courts, which have overshadowed party policy priorities.

"It would be nice to see a speech that kind of brought us together," said Rep. Mike Simpson, R-Idaho. "I'm not talking about the far left or the far right. The independents out there, middle of the roaders, those kind of people who want to see government work."

Trump will be standing before Democrats appalled by his politics and policies, and many Republicans who were barely more supportive during the presidential campaign. However, most Republican lawmakers have rallied around him since the election, hopeful that he will act on the domestic priorities they saw blocked during President Barack Obama's eight years in office.

Trump's speech is technically not a State of the Union address, though newly sworn-in presidents do often address a joint session of Congress in their first weeks in office. The Supreme Court justices and members of Trump's Cabinet will be on hand for the televised event.

First lady Melania Trump will be sitting with special guests on hand to amplify the president's agenda, including the widows of two California police officers killed by a man living in the country illegally. The widow of former Supreme Court Justice Antonin Scalia will also sit alongside Mrs. Trump, a reminder of the president's well-received nomination of federal appeals court Judge Neil Gorsuch to fill Scalia's seat.

In public, Trump has spoken about his presidency's early days with his usual confident bluster, declaring that there's "never been a presidency that's done so much in such a short period of time." But he's privately vented frustrations to friends and associates.

In the Fox interview Tuesday, Trump gave himself an overall "A plus" for effort, but conceded, "In terms of messaging, I would give myself a C or a C plus."

Trump recently complained to one associate that the White House was trying to do too many things at once and none of it was breaking through. He told another associate that the White House had lost control of the story surrounding Michael Flynn, who was fired as national security adviser after misleading Vice President Mike Pence and others about his contacts with Russia.