Trump to Congress: 'New chapter of American greatness' is upon us

WASHINGTON -- President Donald Trump told lawmakers in his first speech before a joint session of Congress that "a new chapter of American greatness is now beginning." Trump touted his administration's accomplishments during his... 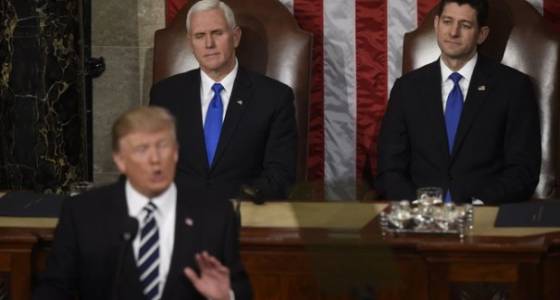 WASHINGTON -- President Donald Trump told lawmakers in his first speech before a joint session of Congress that "a new chapter of American greatness is now beginning."

Trump touted his administration's accomplishments during his first 40 days in office, and talked about how his election changed the country.

"A new chapter of American greatness is now beginning," Trump said. "A new national pride is sweeping across our nation. And a new surge of optimism is placing impossible dreams firmly within our grasp.

"What we are witnessing today is the renewal of the American spirit," he said.

He reminded lawmakers of both parties how he won the White House.

"In 2016, the earth shifted beneath our feet," Trump said, first as a "quiet protest," then a "loud chorus" and then an "earthquake."

"The people turned out by the tens of millions, and they were all united by one very simple, but crucial demand, that America must put its own citizens first, because only then, can we truly make America great again," he said.

While he didn't deliver a laundry list of proposals, Trump renewed his calls for spending more money on the military, fighting terrorism, overhauling the tax code, and building a wall along the U.S.-Mexico border. He offered no specifics.

He also repeated his pledge to repeal and replace the Affordable Care Act, embracing traditional Republican calls for allowing insurers to sell products across state lines, offering tax credits, and allowing individuals to put away money tax-free to pay for health care.

"It is a basic principle that those seeking to enter a country ought to be able to support themselves financially," Trump said. "Yet, in America, we do not enforce this rule, straining the very public resources that our poorest citizens rely upon."

Most of Trump's comments were greeted by applause by the Republicans on one side of the aisle in the House chamber and silence by the Democrats on the other.

But members of both parties stood and cheered when Trump condemned the recent attacks on Jewish cemeteries and the bomb threats targeting Jewish community centers.

He said such actions "remind us that while we may be a nation divided on policies, we are a country that stands united in condemning hate and evil in all its forms."

And members of both parties gave Trump a standing ovation when he called for spending $1 trillion on fixing America's public works projects.

"The time has come for a new program of national rebuilding," Trump said..

Democrats, meanwhile, laughed out loud when Trump, who broke with decades of precedent by refusing to release his income tax returns and who declined to sell his assets and put the proceeds in a blind trust, proclaimed, "We have begun to drain the swamp of government corruption."

The speech stood in for the annual State of the Union address, which traditionally not delivered in the first year of an administration that has occupied the Oval Office for just over a month.

Even before Trump's address, Rep. Donald Payne Jr. (D-10th Dist.) had harsh words for the president.

"President Trump continues to demonstrate that he is unfit for office," Payne said. "Just 40 days into his presidency, President Trump is ill-tempered, ill-informed, and ill-prepared--and it shows every day."

And in the official Democratic response to the speech, former Kentucky Gov. Steve Beshear said that people who disagree with the president shouldn't be branded as enemies of the state.

"When the president attacks the loyalty and credibility of our intelligence agencies, the court system, the military, the free press and individual Americans - simply because he doesn't like what they say - he is eroding our democracy," Beshear said.