Trump still wants wall, but is he softening on immigration?

President Donald Trump on immigration is still a drama without a predictable ending.Hours after telling a group of news anchors Tuesday that he’d consider compromise on legal status for some undocumented immigrants, he talked anew during his joint... 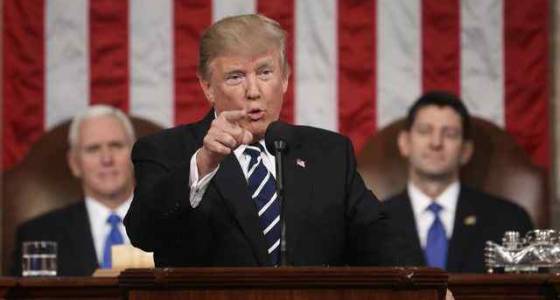 President Donald Trump on immigration is still a drama without a predictable ending.

Hours after telling a group of news anchors Tuesday that he’d consider compromise on legal status for some undocumented immigrants, he talked anew during his joint address to Congress of building a “great wall” along the southern border and vowed to deport criminals. Are all those options possible?

Evan Sayet, a Trump supporter in Calabasas, said he believes Tuesday’s statements suggest that Trump will maintain the DACA program, which afforded protection to immigrants who were brought here illegally as children.

“We’ll keep the good kids and we’ll kick out the criminals,” Sayet said.

Karthick Ramakrishnan, a UC Riverside professor and associate dean of the university’s School of Public Policy, said there does appear to be a slight softening in Trump’s position. But he said the U.S. is still likely to see more deportations than it did during the Obama administration.

In any event, Congress has been unable for many years to reach an agreement on comprehensive immigration reform — failing to do so in both the Bush and Obama eras — and Ramakrishnan doesn’t see that changing.

“What we’re likely to see on immigration is a pattern that continues, where Congress cannot get its act together when it comes to immigration reform,” he said. “That essentially punts the issue over to the executive branch, where Trump is much more pro-enforcement than the Obama administration was.”

Maybe the so-called dreamers won’t be deported, he said, but Trump may well kick out someone who, say, had a driving under the influence violation from more than 10 years ago.

Trump was applauded by Southern California Republicans, including Rep. Ken Calvert of Corona.

“I also support President Trump’s efforts to secure our borders, bolster interior enforcement and to deport criminal aliens,” Calvert said in a statement. “I will continue my efforts to cut off the job magnet by making the use of E-Verify mandatory.”

Sayet remains convinced there is a softer side of Trump, though, and that was seen in some of Tuesday’s comments.

“If this president were to find a way to provide a certain amount of relief for good and decent illegal aliens, but to protect our border and kick out the criminals, I think that both sides would be happy,” he said.

Trump has flirted with a more lenient immigration policy before, saying during the campaign that he was open to “softening” his position. But he ultimately landed where he started, declaring during a speech in September that under his presidency, there would be “no legal status or becoming a citizen of the United States by illegally entering our country.”

Rep. Mark Takano, D-Riverside, however, remains skeptical that any significant change will result.

“The speech overall has left me feeling pretty empty,” Takano said by phone.

He said that Trump’s latest statements on the topic must be set against the numerous “dark” doubts he has sown in the hearts of immigrants to date.

“He’s painting a picture of all immigrants and connecting them with crime,” Takano said.

And, he said, “Building the wall is still a huge commitment of his.”

As for the tough talk on violent immigrants, that’s nothing new. “President Obama already had a long-standing policy of deporting dangerous criminals,” Takano said.