President Donald Trump on Tuesday said he is open to an immigration reform bill that could provide a pathway to legal status - but not citizenship - for potentially millions of people who are in the United States illegally but have not committed serious crimes.At... 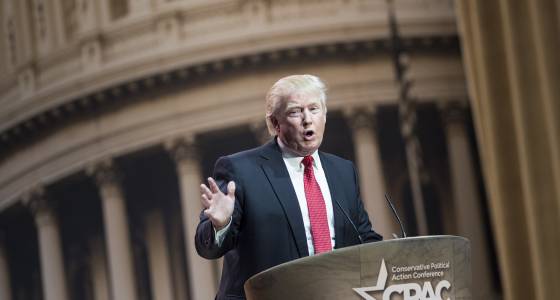 President Donald Trump on Tuesday said he is open to an immigration reform bill that could provide a pathway to legal status - but not citizenship - for potentially millions of people who are in the United States illegally but have not committed serious crimes.

At a private White House luncheon with television news anchors, Trump signaled an openness to a compromise that would represent a softening from the crackdown on all undocumented immigrants that he promised during his campaign and that his more hard-line supporters have long advocated.

"The time is right for an immigration bill as long as there is compromise on both sides," Trump told the anchors. His comments, reported by several of the journalists present, were confirmed by an attendee of the luncheon.

Trump said he hopes both sides can come together to draft legislation in his first term that holistically addresses the country's immigration system, which has been the subject of intense and polarizing debate in Washington for more than a decade.

The comments were particularly striking given Trump's long history of criticism of U.S. immigration policy and a presidential campaign centered on talk of mass deportations of the estimated 11 million undocumented immigrants in the United States.

The remarks came shortly before he met at the White House with family members of Americans killed by illegal immigrants. Trump also invited those family members to attend his address to a joint session of Congress on Tuesday night, part of an emotional appeal by the president and his administration to build support for stronger border-control measures.

Barring any last-minute changes, President Donald Trump will sign a revised travel ban that exempts current visa holders, according to people familiar with the matter.

The revision marks a significant departure from the now-frozen first executive order, which temporarily barred citizens of seven...

Barring any last-minute changes, President Donald Trump will sign a revised travel ban that exempts current visa holders, according to people familiar with the matter.

The revision marks a significant departure from the now-frozen first executive order, which temporarily barred citizens of seven...

At the meeting with television anchors, Trump suggested he is willing to address legal status for those who are in the country illegally but have not committed crimes. But he would not necessarily support a pathway to citizenship, except perhaps for "Dreamers," who were brought into the country illegally as children, according to a report by CNN's Wolf Blitzer and Jake Tapper, who attended the luncheon.

"The president has been very clear in his process that the immigration system is broken and needs massive reform, and he's made clear that he's open to having conversations about that moving forward," Sanders said in a Tuesday afternoon briefing with reporters. "Right now his primary focus, as he has made [clear] over and over again, is border control and security at the border."

Trump has vowed to build a wall along the U.S.-Mexico border and increase funding for federal law enforcement efforts in border areas. He also has instructed the Department of Homeland Security to round up and deport those in this country illegally who have committed serious crimes or caused violence.

Rumors about deportation raids started to circulate around the fields again, so Catalina Sanchez and her husband began to calculate the consequences of everything they did.

Cirilo Perez, 36, had to go to work because the tomato crop was getting low, and he needed to pick as much as he could as...

Rumors about deportation raids started to circulate around the fields again, so Catalina Sanchez and her husband began to calculate the consequences of everything they did.

Cirilo Perez, 36, had to go to work because the tomato crop was getting low, and he needed to pick as much as he could as...

The president likened recent immigration raids to "a military operation," although Homeland Security Secretary John Kelly made clear the military was not involved in conducting them.

It is unclear whether Trump will follow through on pursuing an immigration compromise. The president in the past has made comments, in private or in media interviews, that have not been borne out by his administration's policies. For example, he has yet to follow through on his pledge to investigate alleged voter fraud in the 2016 election.

In early February, Trump expressed openness to revisiting past immigration reform efforts, including the failed 2013 "Gang of Eight" bill, which drew opposition from Republicans. At a meeting with moderate Democratic senators, Trump told them he thought that bill was something he was interested in revisiting, according to the senators.

The White House later denied that Trump was open to the legislation and said that he considered the bill to be "amnesty."

After his meeting with the anchors Tuesday, Trump met in the Oval Office with Jamiel Shaw Sr., whose son was shot by a gang member in Los Angeles in 2008, and Jessica Davis and Susan Oliver, who were married to California police officers killed in the line of duty in 2014.

Their presence in the presidential box in the House chamber Tuesday evening represented a pointed message about the costs of illegal immigration a week after the DHS rolled out sweeping new enforcement guidelines. Trump said the measures are aimed at ramping up the deportations of immigrants who present a public safety risk, part of a broader effort that includes plans for a border wall with Mexico and attempts to restrict refugees from seven majority-Muslim nations.

Trump's spotlight on the victims' families has sparked an outcry among those who charge that the president is exaggerating the risks to sow public fear and make his proposals more politically expedient. Studies have shown that immigrants, including the estimated 11 million living in this country illegally, have lower crime rates than the native-born population.

"It is consistent with the campaign and also with the political tone of the executive orders he signed," said Randy Capps, director of research at the Migration Policy Institute. "They are very clearly trying to highlight a criminal element that does exist in the unauthorized population. But they are implying it's a broad population, when we believe it's a narrow population from the statistics we've seen."

Proponents of stricter immigration policies said the president is trying to reframe the debate by focusing it around the harmful effects that U.S. immigration laws can have on Americans.

"The media tends to cover immigration issues through the frame of how it impacts everybody but actual citizens of the United States," Stephen Miller, Trump's senior policy adviser, said in an interview with Bloomberg Businessweek published Tuesday.

In many cases, immigrants convicted of crimes are released from federal custody because of a Supreme Court ruling that prevents indefinite detention if their countries will not accept them back.

In other cases, local jurisdictions known as "sanctuary cities" have passed laws that prohibit officials from sharing information with federal authorities about illegal immigrants who pass through the judicial system. In 2015, Kathryn Steinle, a San Francisco woman, was shot and killed by an undocumented immigrant from Mexico who had been deported five times, a case that drew national attention.