Trump promises to restore integrity, the rule of law (w/video)

Addressing Congress for the first time, President Donald Trump issued a broad call for overhauling the nation's health care system and revving up the U.S. economy, declaring that "the time for small thinking is over." 5 Months Ago6 Months Ago6... 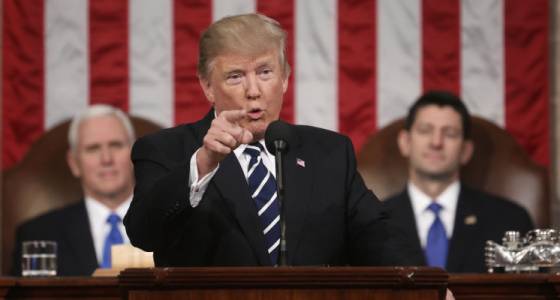 Addressing Congress for the first time, President Donald Trump issued a broad call for overhauling the nation's health care system and revving up the U.S. economy, declaring that "the time for small thinking is over."

Trump said that by "finally enforcing our immigration laws, we will raise wages, help the unemployed, save billions of dollars and make our communities safer for everyone."

Trump's address comes at a pivotal moment for a new president elected on pledges to swiftly shake up Washington and follow through on the failed promises of career politicians.

The president spent his opening weeks in office flexing his executive power but has yet to push into the complex legislative battles over health care and tax reform. The White House bungled the rollout of a sweeping immigration and refugee ban and has been plagued by persistent questions about Trump campaign advisers' contacts with Russia during the election. The president has picked fights with the media and the intelligence community, blaming agencies he now oversees for leaking classified information that put him in a negative light.

Trump's turbulent start has left him saddled with historically low approval ratings for a new president. Just 44 percent of Americans approve of his job performance, according to a new NBC News/Wall Street Journal survey.

Parts of Trump's prime-time speech amounted to a defense of his early actions. He touted his decisions to withdraw the United States from a sweeping Pacific Rim trade pact and to order the government to start working on a wall along the U.S.-Mexico border.

"We must restore integrity and the rule of law to our borders," Trump said. "For that reason, we will soon begin the construction of a great wall along our southern border. It will be started ahead of schedule and, when finished, it will be a very effective weapon against drugs and crime."

Speaking on health care, Trump once again called for legislators to get rid of Obamacare.

"I am also calling on this Congress to repeal and replace Obamacare with reforms that expand choice, increase access, lower costs, and at the same time, provide better health care," he said. "Mandating every American to buy government-approved health insurance was never the right solution for America. The way to make health insurance available to everyone is to lower the cost of health insurance, and that is what we will do."

On foreign policy, Trump voiced his support for NATO but also kept the pressure on partner countries to meet their financial obligations to the military alliance.

"We strongly support NATO, an alliance forged through the bonds of two World Wars that dethroned fascism, and a Cold War that defeated communism," he said. "But our partners must meet their financial obligations. And now, based on our very strong and frank discussions, they are beginning to do just that."

In excerpts of the Democratic response to Trump's speech, former Kentucky Gov. Steve Beshear called the president "reckless" for criticizing the intelligence agencies and other institutions. "He is eroding our democracy," Beshear said.

Trump stood before Democrats appalled by his politics and policies, and many Republicans who were barely more supportive during the presidential campaign. However, most Republican lawmakers have rallied around him since the election, hopeful that he will act on the domestic priorities they saw blocked during President Barack Obama's eight years in office.

Trump's speech is technically not a State of the Union address, though newly sworn-in presidents do often address a joint session of Congress in their first weeks in office. The Supreme Court justices and members of Trump's Cabinet were on hand for the televised event.

In public, Trump has spoken about his presidency's early days with his usual confident bluster, declaring that there's "never been a presidency that's done so much in such a short period of time." But he's privately vented frustrations to friends and associates.

In the Fox interview Tuesday, Trump gave himself an overall "A plus" for effort, but conceded, "In terms of messaging, I would give myself a C or a C plus."

Trump recently complained to one associate that the White House was trying to do too many things at once and none of it was breaking through. He told another associate that the White House had lost control of the story surrounding Michael Flynn, who was fired as national security adviser after misleading Vice President Mike Pence and others about his contacts with Russia.