Maybe Donald Trump’s working on his long game.The president hit the links at his golf course in Virginia on Sunday with Sen. Rand Paul, one of his chief rivals in the Republican effort to repeal and replace ObamaCare, to talk healthcare.Paul, dressed... 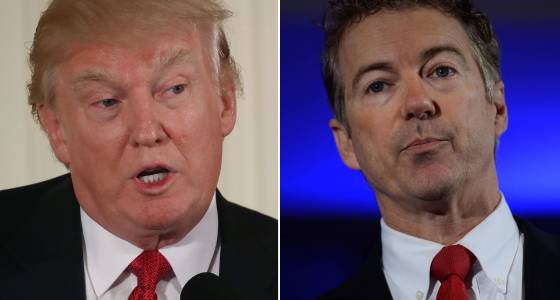 The president hit the links at his golf course in Virginia on Sunday with Sen. Rand Paul, one of his chief rivals in the Republican effort to repeal and replace ObamaCare, to talk healthcare.

Paul, dressed in a dark windbreaker, was seen with the president and Budget Director Mick Mulvaney at the Trump National Golf Club in Sterling, Va., according to pool reports from the White House.

Trump was wearing a dark suit as he entered exited the presidential motorcade and entering the club house with Paul, a Republican from Kentucky.

Paul, a libertarian, was among the more conservative faction of Republicans in the House and Senate who opposed the GOP-backed plan to repeal and replace ObamaCare, saying it didn’t go far enough to repeal former President Obama’s legislation.

Trump and Paul, who ran for the Republican presidential nomination, frequently clashed with Trump during the campaign.

At one point, Trump launched an attack on Paul and his golf game.

“Recently, Rand Paul called me and asked me to play golf. I easily beat him on the golf course and will even more easily beat him now, in the world in the politics [sic],” Trump said in August 2016.

Trump, a frequent critic of Obama’s golfing, has now hit the fairway 13 times since becoming president on Jan. 20.