WASHINGTON -- President Donald Trump gave Republican congressional leaders a rallying cry and even a roadmap as they try to push through a sweeping and divisive agenda on health care, taxes and more.In his first address to a joint session of Congress, Trump... 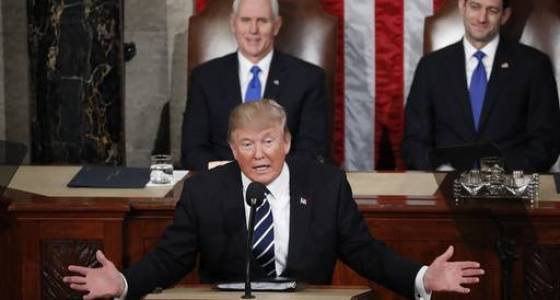 WASHINGTON -- President Donald Trump gave Republican congressional leaders a rallying cry and even a roadmap as they try to push through a sweeping and divisive agenda on health care, taxes and more.

In his first address to a joint session of Congress, Trump said largely what GOP leaders were hoping to hear Tuesday night, staying on-message and talking in optimistic tones, even weighing in at one point to settle a brewing dispute over how to repeal and replace the Affordable Care Act.

Those tax credits have sparked a fierce conservative backlash in recent days, imperiling GOP efforts to make good on the party's long-stated promise to get rid of "Obamacare" and put something better in its place. Ahead of the speech congressional Republicans had been unsure how far Trump would go in backing their plan, with some pleading openly with him to do so, and many were elated at what they heard.

"We should help Americans purchase their own coverage, through the use of tax credits and expanded health savings Accounts - but it must be the plan they want, not the plan forced on them by the government," Trump said, as Republicans cheered and Democrats sat silently in their seats.

It remains to be seen whether Trump's endorsement of refundable tax credits will be enough to tame rebellious conservatives in the House and Senate who have criticized them as a costly new entitlement. The initial response from one key conservative group, the Freedom Caucus in the House, was full of praise for Trump's speech without mentioning the divisions over tax credits.

"We were pleased the President reaffirmed his commitment to fully repeal Obamacare and replace it with patient-centered, market-driven policy. We share his vision," the group said.

Trump also addressed taxes, another major issue that is dividing Congress. After weeks of sending mixed signals, he provided hope to House Republican leaders pushing a tax overhaul that would tax imports but not exports. But he stopped short of explicitly endorsing the proposal.

"Currently, when we ship products out of America, many other countries make us pay very high tariffs and taxes - but when foreign companies ship their products into America, we charge them almost nothing or almost nothing," Trump said.

Without providing specifics, Trump said he will propose to change that.

Rewriting health care and overhauling the tax code are the twin pillars of the Republican-run Congress' legislative platform this year and GOP lawmakers have been eager for guidance from the president on both counts.

House Ways and Means Chairman Kevin Brady of Texas welcomed Trump's remarks on taxes, and said "It was also great to hear the president's strong support for our efforts to repeal Obamacare."

House leaders hope to meet an ambitious goal of passing health legislation through the House and maybe even the Senate before mid-April. That was looking in doubt as divisions surfaced ahead of Trump's speech, and it remains to be seen whether the deadline will be met.

Democrats, accustomed to jeering at Trump as he veers off message, advances false claims or resorts to personal insults, argued that in delivering a speech that did none of those things, Trump gave a wrong impression of how he has comported himself as president after five weeks in office.

"President Trump's speech had an air of unreality because what he said tonight was so different than how he has governed in the first 40 days," said Senate Minority Leader Chuck Schumer of New York.

Trump planned to continue his legislative push on Wednesday, meeting with House and Senate leaders for lunch at the White House before leading a legislative affairs strategy session in the afternoon. Senate Majority Leader Mitch McConnell also summoned senators to a closed-door afternoon meeting on health care to hash out divisions on the issue in that chamber.

But Republicans' enthusiastic reception to Trump's speech could belie tough fights ahead. Trump called on Congress to approve a $1 trillion infrastructure bill, something likely to set up a clash with deficit hawks, and also renewed his call for money for a border wall, which could provoke a spending fight with Democrats and even the threat of a government shutdown.

And underscoring the distance that still remains between Trump and congressional Republicans, the speech made no mention of overhauling the financially-shaky Medicare or Social Security, the expensive, enormous entitlement programs that Republicans have long attacked. Trump's budget leaves those programs untouched and Ryan has recently declined to say that dealing with them remains a priority.

On health care, far from his blanket statement in January that his plan would ensure "coverage for everybody," Trump on Tuesday embraced an overhaul that would "increase access," the phrase House Republicans have used to describe their more modest goal.