MOSCOW – The phrase was too toxic even for Nikita Khrushchev, a war-hardened veteran communist not known for squeamishness. As leader of the Soviet Union, he demanded an end to the use of the term “enemy of the people” because “it... 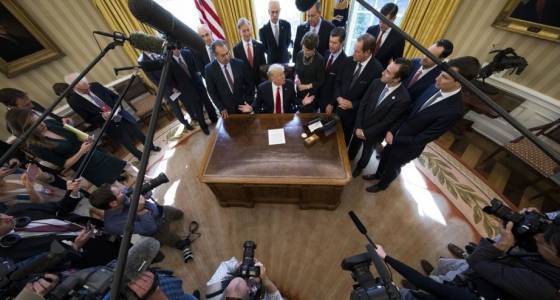 MOSCOW – The phrase was too toxic even for Nikita Khrushchev, a war-hardened veteran communist not known for squeamishness. As leader of the Soviet Union, he demanded an end to the use of the term “enemy of the people” because “it eliminated the possibility of any kind of ideological fight.”

“The formula ‘enemy of the people,’ ” Khrushchev told the Soviet Communist Party in a 1956 speech denouncing Stalin’s cult of personality, “was specifically introduced for the purpose of physically annihilating such individuals” who disagreed with the supreme leader.

It is difficult to know if President Donald Trump is aware of the historic resonance of the term, a label generally associated with despotic communist governments rather than democracies. But his decision to unleash the terminology has left some historians scratching their heads. Why would the elected leader of a democratic nation embrace a label that, after the death of Stalin, even the Soviet Union found to be too freighted with sinister connotations?

Nina Khrushcheva, the great-granddaughter of Khrushchev and a professor of international affairs at the New School in New York, said the phrase was “shocking to hear in a non-Soviet, moreover non-Stalinist setting.” Her great-grandfather, she said, “of course also used Soviet slogans and ideological idioms but still tried to stay away from sweeping denunciations of whole segments of the Soviet population.”

In Trump’s case, however, he is branding as enemies a segment of the U.S. population — specifically representatives of what he calls the “fake news” media, including The New York Times.

He has used the phrase more than once, including Friday during an attack on the news media at a conservative gathering in which he said that some reporters were making up unnamed sources to attack him.

“A few days ago, I called the fake news the enemy of the people because they have no sources — they just make it up,” the president said, adding that the label applied only to “dishonest” reporters and editors. Hours later, Sean Spicer, White House press secretary, barred journalists from several news organizations, including The Times, from attending a briefing in his office.

By using the phrase and placing himself in such infamous company, at least in his choice of vocabulary to attack his critics, Trump has demonstrated, Khrushcheva said, that the language of “autocracy, of state nationalism is always the same regardless of the country, and no nation is exempt.” She added that, in all likelihood, Trump had not read Lenin, Stalin or Mao Zedong, but the “formulas of insult, humiliation, domination, branding, enemy-forming and name calling are always the same.”

The White House did not immediately respond to a request for comment.

The phrase “enemy of the people” first entered the political lexicon in 1789, with the French Revolution. The revolutionaries initially used it as a slogan that was hurled willy-nilly at anybody who opposed them. But, as resistance to the revolution mounted, the term acquired a far more lethal and legalistic meaning with the adoption of a 1794 law that set up a revolutionary tribunal “to punish enemies of the people” and codified political crimes punishable by death. These included “spreading false news to divide or trouble the people.”

The concept resurfaced in a more benign form nearly a century later in “An Enemy of the People,” an 1882 play by Norwegian writer Henrik Ibsen about an idealistic whistleblower in a small town at odds with authorities and locals who, to protect the economy, want to suppress information about water contamination. The Bolshevik Revolution of 1917 returned the term to the blood-drenched dramas of the French Revolution, with Lenin declaring in Pravda that the Jacobin terror against “enemies of the people” was “instructive” and needed to be revived, so as to rid the Russian people of “landowners and capitalists as a class.”

Stalin, who took over as Soviet leader upon Lenin’s death in 1924, dramatically expanded the scope of those branded as “enemies of the people,” targeting not only capitalists but also dedicated communists who had worked alongside Lenin for years, but whom Stalin viewed as rivals.

“In essence, it was a label that meant death. It meant you were subhuman and entirely expendable,” said Mitchell A. Orenstein, professor of Russian and East European Studies at the University of Pennsylvania. “This is the connotation for anyone who lived in the Soviet Union or knows anything about the Soviet Union, which Donald Trump obviously doesn’t — or he doesn’t care.”

He said that it was hard to figure out whether Trump was aware of the resonance of the phrase or simply used it because “he knows it riles up people who have a certain degree of knowledge. He is only alienating them, and they are the people he wants to alienate anyway. His base sees comparisons with Stalin as just more evidence of the liberal mainstream media going haywire.”

Moreover, by using such a loaded term in such a cavalier fashion, the president “is in the process of rendering it meaningless,” Orenstein said. “It becomes just na-na-na-na-na,” he added, because nobody really thinks Trump will bring back the guillotine.

Philip Short, a British author who has written biographies of Mao and Cambodia’s genocidal leader Pol Pot, said Trump delighted in “shaking things up, and this kind of language does just that.”

“We try to analyze it from an establishment point of view, but this leads nowhere,” he added. “I don’t know if Trump has ever read Stalin, but if he wants to destabilize people, he is doing it perfectly.”

William Taubman, author of a biography of Khrushchev and emeritus professor of political science at Amherst College, said it was “shocking” that Trump would revive a term that had fallen into disrepute in the Soviet Union after Stalin’s death in 1953. “It was so omnipresent, freighted and devastating in its use under Stalin that nobody wanted to touch it,” he said. “I have never heard it used in Russia except in reference to history and in jokes.”

Khrushcheva said that Trump has “been using a lot of this kind of political-ideological branding” favored by revolutionary leaders, deploying terms like “liberal sympathizer” and “language about gloom and doom in America that is much more forcefully negative than that even used by the Russians.”

He has also gone one step further than Chinese and Khmer Rouge communists in Cambodia, who generally preferred homegrown insults to those imported from the Soviet Union.

Short, the Mao and Pol Pot biographer, said Chinese and Cambodian communists, all fiercely nationalistic, rarely if ever used “enemy of the people” in domestic political struggles because it was an alien import. Instead, Pol Pot attacked enemies as “ugly microbes” who would “rot society, rot the Party and rot the country from within,” while Maoists coined insults like “the stinking ninth category” to denounce experts and intellectuals.

Mao, Short said, “used Chinese expressions and spoke like a Chinese, not a Russian. He did not use the Soviet jargon much. But Trump does, which is extraordinary.”

Mao did on occasion use “enemy of the people,” but he directed it not at his domestic foes but at the United States, declaring in 1964 that “U.S. imperialism is the most ferocious enemy of the people of the entire world.”

“Politicians normally use phrases that resonate with their own people,” Short said. “Mao and Pol Pot did not just regurgitate Stalinist terms. What is extraordinary about Trump is that he has taken up a Stalinist phrase that is entirely alien to American political culture.”