CLEVELAND, Ohio -- The Waves beat out 11 other finalists and aced the Final Exam of the 21st annual Tri-C High School Rock Off, which was held Saturday night at the Rock & Roll Hall of Fame. Montage came in second place, while Time Out placed third.... 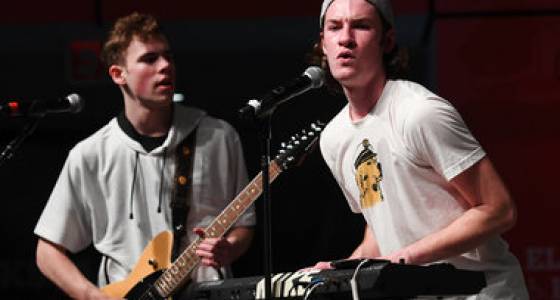 CLEVELAND, Ohio -- The Waves beat out 11 other finalists and aced the Final Exam of the 21st annual Tri-C High School Rock Off, which was held Saturday night at the Rock & Roll Hall of Fame.

Montage came in second place, while Time Out placed third.

The Waves, of Archbishop Hoban in Akron and Woodridge in Peninsula, performed in front of a wildly enthusiastic crowd.

People repeatedly chanted the band's name as its members set up stage props, including a gong and a colorful flag with Bob Marley's visage.

The alternative rockers sprinted onstage wearing matching light-up skull masks and hoodies with the number ''717'' on the back.

Highlights of their set included a rip-roaring cover of Rage Against the Machine's ''Bulls On Parade.''

Montage, a trio of three Cleveland School of the Arts students, performed genre-smashing originals that nodded to rock, funk, R&B and soul.

Bassist/vocalist Jasmine Sims strutted on the stage in socks, a dreamcatcher hanging from her instrument as she kicked out heavy grooves.

At times, her approach resembled that of Prince -- appropriate, since she even sported sunglasses on stage, just like he used to.

Kevin Pace Jr., who was one of the few drummers at the event to take a brief solo,anchored the troupe with hard-hitting glee.

The spitfire punk trio Time Out kicked off its set with a hot-rodding cover of Nirvana's ''Breed'' that preserved the snotty tone of the original.

Later, the act fired up the crowd more with a snarlingtake on Johnny Cash's ''Folsom Prison Blues.''

Two-time Rock Off winners First To Eleven put on a Warped Tour-ready set heavy on spacey-sounding modern rock reminiscent of CircaSurvive and PVRIS.

Avon Lake High School's The Frats opened its set with a funked-up cover of Styx's ''Renegade'' -- featuring a precise a cappella vocal intro -- and segued into a sizzling, frenzied cover of Matthew Sweet's ''Girlfriend.''

Man Cried Wolf chimed in with a dynamic set of wellcrafted tunes that nodded to everything from Dashboard Confessional-caliber emo-rock to metallic-tinged screamo.

The Lonely Pirate Committee showed off a variety of influences -- Radiohead, grungy shoegaze and psychedelic rock -- in its ambitious set.

Last Minute turned in an empowering set, which included Joan Jett & The Blackhearts' ''I Hate Myself for Loving You'' and a kicky take on Paramore's ''Still Into You.''

Ska troupe Bucyrus High School Xband was the most spirited act of the night. The group's members sported a colorful array of Converse Chuck Taylor All Stars shoes while jumping and dancing during horn-peppered covers of Stevie Wonder's ''Superstition'' and Dexys Midnight Runners' ''Come On Eileen.''

The night's final performer, No Good Solutions, ended the evening on a high note with a ferocious set of keyboard-driven, soulful rock 'n' roll.

As the winner, The Waves earned $1,000 for themselves and $250 for their high school's music program.

The group also nabbed a performance slot at the Blossom Music Center stop of the 2017 Vans Warped Tour and tickets to see Bon Jovi at The Q on March 19.