Feb. 24, 2017 By Rene Stutzman | Orlando SentinelSANFORD — Francis Oliver took to the streets of Sanford with more than 8,000 other people, demanding the arrest of the man who killed Trayvon Martin, an unarmed black 17-year-old.When Trayvon’s... 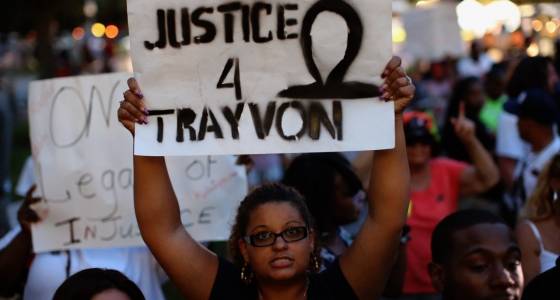 SANFORD — Francis Oliver took to the streets of Sanford with more than 8,000 other people, demanding the arrest of the man who killed Trayvon Martin, an unarmed black 17-year-old.

When Trayvon’s killer went on trial the following year, she cooked meals for his parents and let them take naps at her home.

Specifically, the phrase was coined on July 13, 2013, the day a Seminole County jury acquitted George Zimmerman, the Neighborhood Watch volunteer who shot Trayvon after calling 911 and describing him as suspicious. Zimmerman had been arrested six weeks after the shooting and charged with second-degree murder.

That shooting was five years ago this week.

It unleashed a firestorm of public protest, not just in Sanford, but in major cities across the United States and beyond: In Los Angeles, New York, Chicago and London.

Ese Ighedosa, 29, now an attorney for the NFL, was a protester and a student at the Florida A&M University College of Law in Orlando at the time of the shooting. She was at Sanford City Hall with Trayvon’s parents the night city officials played a 911 call for them that captured cries for help — and then a shot.

“This was really the resurgence of the civil rights movement,” she said.

When Zimmerman shot Trayvon, Barack Obama had been in the White House for three years and, “Many Americans … felt that we were in a post-racial era,” said the Rev. Al Sharpton, a civil rights activist who came to Sanford twice in March 2012 to lead rallies calling for Zimmerman’s arrest.

Sharpton got involved, he said, because “I realized how vulnerable we were, that this guy wasn’t even a policeman, and he could just kill this kid and not even be arrested. … That’s what outraged me.”

He said he doesn’t think young black men are better off now than they were when Trayvon was shot, but there is one big change: the movement led to accountability. He said people now demand answers when police kill young black men, and they’re willing to take to the streets in protest.

“The demonstrations, the rallies that many of us came and started led into what later happened two years later around Ferguson (Mo.), around Eric Garner; but it started, the seeds of that started in Trayvon Martin, so Trayvon Martin energized a renewal of civil rights activism in the 21st century like Emmett Till energized it in the 20th century,” Sharpton said.

Key figures in the case: Where are they now? »

Government data indicates that in Central Florida, life has improved for young black men in some ways but gotten worse in others since Trayvon was killed.

Their unemployment rate in Orange County is down 38 percent, according to the U.S. Census Bureau, and the rate at which they graduate from high school is up sharply in Orange, Seminole, Osceola, Lake, Volusia and Brevard counties, as it is for all students, according to the Florida Department of Education. The Florida Department of Economic Oppportunity had no unemployment numbers for black men ages 15 to 25 in Seminole County in those years.

But the poverty rate for black males, ages 15 to 25, is 3 percent higher in those same six counties, the census bureau reported.

The number of black males ages 15 to 25 who are the victims of homicide in Central Florida has seesawed since 2012, according to the Florida Department of Law Enforcement. That year, Trayvon was one of 31. In 2015, the most recent year for which data is available, the number was 35.

Trayvon’s death: The No. 1 story in the country

A few days after the shooting, Trayvon’s father, Tracy Martin, hired Tallahassee civil rights lawyer Benjamin Crump and went on national television with their story: An unarmed black high school kid who was doing nothing unlawful was fatally shot, and Sanford police wouldn’t arrest the light-skinned Hispanic man who did it.

Local members of the black community, including Francis Oliver, and others called for Zimmerman’s arrest.

He went into hiding but cooperated with police. He told them that he shot Trayvon in self-defense. The Miami Gardens teenager had punched him, knocked him to the ground then climbed on top and begun hammering his head against a sidewalk, he said.

Photos showed him with a swollen nose and blood coming from the back of his head.

Sanford’s police chief at the time, Bill Lee Jr., said there wasn’t enough evidence to justify an arrest but that his investigators were still working the case.

Reporters from the Orlando Sentinel, The New York Times, CNN and more than a dozen other news organizations flooded into Sanford, and the rallies got bigger.

Busloads of people came from Atlanta to a rally headlined by Sharpton that drew an estimated 8,000 people. A week later, Sharpton returned and was joined on stage by another civil rights icon, Jesse Jackson.

The president of the national NAACP also came to Sanford and demanded that the police chief be fired – and he eventually was.

According to the Pew Research Center for the People & the Press, for two weeks, when the people it polled were asked to name the most important story in the news, the No. 1 answer was the Trayvon Martin shooting.

On March 19, 2012, Ighedosa, the NFL lawyer, and about 75 other protesters marched outside the Seminole County Criminal courthouse. They insisted upon – and got – a sit-down meeting with the county’s lead prosecutor.

The shooting and protests surrounding it were “life-changing. … That showed me how powerful my voice is and also what my responsibility is to speak out.”

Zimmerman hired Orlando lawyer Mark O’Mara to defend him. The experience changed his life, O’Mara said. He got a national reputation, and CNN hired him as a legal expert, a contract now in its fourth year.

“Once … I said I’d represent George Zimmerman, from that date forward, everything changed,” O’Mara said. Trial preparation consumed the next year of his life; then came the five-week trial.

“Now I do speaking engagements throughout the country, internationally, actually, and I have all these civil rights cases. … I really consider it a blessing to have an opportunity to have a voice in civil rights matters.”

Zimmerman, 34, would not comment about the anniversary of Trayvon’s death. In addition to his acquittal in state court, he was cleared of federal civil rights charges following a grand jury investigation.

Curtis Hierro, 29 of Orlando, took part in a 31-day sit-in at the State Capitol in Tallahassee shortly after Zimmerman’s acquittal.

“I see the murder of Trayvon Martin as an awful moment that I think stirred many folks to action,” he said.

He and other protesters were calling for the repeal of Florida’s Stand Your Ground law, which provides immunity to anyone who uses deadly force as long as they have a reasonable fear of imminent death or great bodily injury.

Their efforts failed. This year a measure is moving through both houses of the Legislature that would strengthen the law and make it harder for prosecutors to win Stand Your Ground hearings.

Sharpton wants the law repealed as well, and not just in Florida.

The Civil Rights Act passed in 1964, he said, nine years after Rosa Parks refused to move to the back of a bus, an act that launched the Montgomery bus boycott in Alabama. Sharpton said he is hopeful that Stand Your Ground laws will be repealed.