TravelCenters of America details costs of fuel-card dispute, amid litigation

WESTLAKE, Ohio -- Truck-stop operator TravelCenters of America, LLC, says a fuel-card provider is withholding an extra $850,000 to $1 million a month from the Fortune 500 company as a contract dispute makes its way through the court system. Thomas... 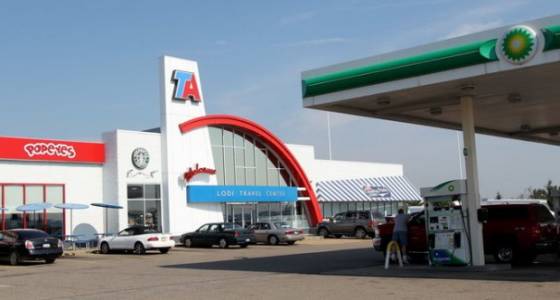 WESTLAKE, Ohio -- Truck-stop operator TravelCenters of America, LLC, says a fuel-card provider is withholding an extra $850,000 to $1 million a month from the Fortune 500 company as a contract dispute makes its way through the court system.

Thomas O'Brien, the Westlake-based company's chief executive officer, offered brief remarks on the litigation during a Tuesday conference call with analysts. The lawsuit centers on the continuation of a merchant contract between TravelCenters and Comdata, which provides cards that truckers use for refueling and other purchases.

In a lawsuit filed in Delaware in late November, TravelCenters claimed that the fuel-card business essentially was holding the company hostage for more money. When TravelCenters refused to renegotiate an existing, long-term agreement that wasn't set to expire until 2022, Comdata's parent company responded by claiming a default.

The parties are battling it out in court, where a trial could occur soon.

But in an annual report filed Tuesday and a follow-up conference call, TravelCenters said that Comdata recently raised the fees it holds back from each purchase.

O'Brien described the default declaration and fee hikes as "inappropriate."

During the fourth quarter, TravelCenters spent $750,000 on legal fees and other expenses associated with the fuel-card fight, according to a regulatory filing.

Many truck drivers use fuel cards to pay for diesel, other goods and services. Such cards allow trucking companies to track what their drivers are spending. FleetCor Technologies, Inc., the parent company of Comdata, and WEX, Inc., are the two major fuel-card providers that trucking companies use.

In September, Comdata sent TravelCenters a notice of default. The fuel-card vendor claimed that TravelCenters didn't live up to an agreement to install radio frequency identification technology at more than 200 travel centers to simplify payments.

The companies have argued over how much work TravelCenters accomplished, who was holding whom back and whether the timing of the RFID rollout has any bearing on the merchant contract between the businesses.

TravelCenters says the issues and agreements are separate. Comdata disagrees.

Losing the contract would be a financial blow to TravelCenters, which says truckers use the cards for more than 40 percent of their fuel purchases at TravelCenters, TA and Petro facilities.

The company is seeking a declaration that it's not in default and a determination that Comdata has violated the contract and has acted deceptively and unfairly.

Its losses widened to $6.4 million, or 17 cents per share, during the final three months of 2016, from $1.6 million, or 4 cents per share, a year before. The company attributed the higher loss to increased depreciation expenses tied to investments in new and improved facilities. At the end of 2015, TravelCenters also benefited from biodiesel-related tax credits - a boon that didn't recur late last year.

The company's shares, listed on the Nasdaq, closed trading Tuesday at $6.50, down 12.7 percent.