Famagusta 16°
overcast clouds
BUSINESS EDUCATION ENTERTAINMENT HEALTH POLITICS SCIENCE SPORTS TECHNOLOGY
10:22 Four Benefits of Hiring a Dedicated Development Team
04:48 Mark Kelly, President of Safety Marking Inc., Discusses Structuring Effective...
17:58 Trump wants to play golf at the Biden swearing-in in Scotland - but is...
17:54 First doubts Regarding tightened Steps: two National Countries Extract...
10:39 Covid-19 : in France, the end of containment and entry into force of the...
04:34 The schools of Rome will use the Internet with light bulbs: what it is...
10:58 Kratom Tea: How Is It?
11:46 Office Furniture Products for you!
12:17 Top Clubs, Their Value, Revenue And Current Standings
11:14 Reasons Why Rewarding Yourself is a Good Practice
BIST
1536
GOLD
438.366
USD
7.3696
GPB
10.1326
EUR
8.9593
Breaking News
Navigating a Hearing Disorder Diagnosis
Close 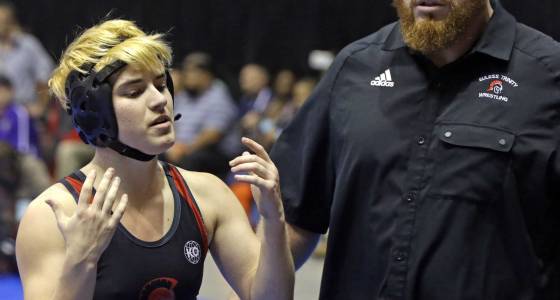 Beggs is a junior from Euless Trinity in the Dallas-Fort Worth area. His family has said he would rather be wrestling boys. Some girls and their advocates agree.

They say the testosterone Beggs has been taking while transitioning from female to male has made him too strong to wrestle fairly against girls. But state policy calls for students to wrestle against the gender listed on their birth certificates.

So Beggs beat Taylor Latham and Mya Engert handily on Friday before his victory over Clay that sent him to the finals.

He and Clay shared a long hug before an official raised Beggs' arm to signal victory, and the wrestler scurried off the mat. Clay's coached shouted to reporters that she "did not have permission" to talk to them after her loss and both of her parents declined comment.

Beggs, who reached the state tournament after two opponents forfeited, will face Chelsea Sanchez for a shot at a state title.

Beggs' participation comes at a crucial moment, with the public and politicians debating the growing belief that gender is fluid. Just this week, the Trump administration announced an end to federal protections that allowed transgender students to use facilities based on their gender identity, leaving states and school districts to determine their own policies.

And in Texas, lawmakers are considering a bill similar to HB2, the North Carolina law that prompted the NBA to move this year's All-Star Game out of that state. If passed, the Texas version, called SB6, would require transgender people to use the bathroom of their "biological sex."

Attorney Jim Baudhuin tried and failed to get injunctions before both the district and regional meets to prevent Beggs from competing while he transitions. He told The Associated Press earlier this week he doesn't blame Beggs for the situation, but faults the UIL.

"The more I learn about this, the more I realize that she's just trying to live her life and her family is, too," Baudhuin said. "She's being forced into that position. Who knows, through discovery we may find out that's not the case. But every indication is, the way the winds are going now, the blame rests with the UIL and the superintendents."