CYPRESS, Texas — Mack Beggs could win a Texas state wrestling title on Saturday.Win or lose, the debate over whether a 17-year-old transgender boy should be wrestling girls will continue.Beggs won two matches on Friday to advance to Saturday's semifinals,... 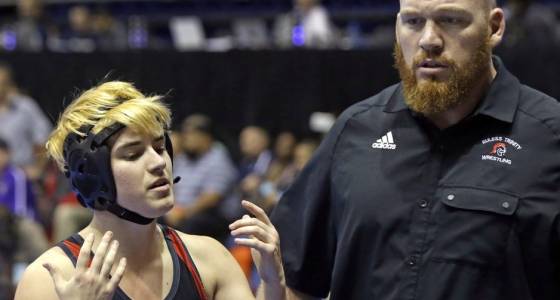 Win or lose, the debate over whether a 17-year-old transgender boy should be wrestling girls will continue.

Beggs won two matches on Friday to advance to Saturday's semifinals, moving him within two victories of a gold medal.

Beggs' family has said he would rather be wrestling boys. Some girls and their advocates agree, arguing that the testosterone treatments Beggs has been taking while in transition from female to male have made him too strong to wrestle fairly against women. But under the state's governing policy for athletics, students must wrestle against the gender listed on their birth certificates.

Beggs beat Taylor Latham in the 110-pound class Friday. The score was 18-7.

It was a match Latham's mother didn't want to happen. Her daughter, she said, was wrestling someone whose body was chemically toned for strength. Melissa Phillip, Associated Press Mack Beggs, top, a transgender wrestler from Euless Trinity High School, is shown with his coach Travis Clark during a quarterfinals match at the State Wrestling Tournament on Feb. 24, 2017, in Cypress. Beggs was born a girl and is transitioning to male but wrestles in the girls division.

"Completely unfair advantage," Lisa Latham said. "I've called the UIL, the ACLU, writing a letter to the governor. I think it's just a complete disadvantage to the female wrestlers."

But Lisa Latham also feels for the boy in the center of this controversy.

"It's a no-win win situation," she said. "Mack wants to wrestle boys. (But) he'll never be recognized as a boy because of the birth certificate in the state of Texas. The female wrestlers don't have a chance. It's a no win ... for either one."

At match's end Beggs shook hands with Latham before pointing high in the stands to cheering fans wearing the colors of his school, Euless Trinity. He celebrated for a few seconds. Then Beggs and his grandmother, led by his coach, jogged across the mats and into an area restricted to athletes and coaches.

While many cheered Beggs, others said the match was unfair. Patti Overstreet, a self-described wrestling parent, left her seat shouting, "that's cheating" and "big cheater!"

"Look at how beefed up she is," Overstreet said, referring to Beggs. "It's because she's taking an enhancement. Whether she's a boy, girl, wants to be purple or blue it doesn't matter. When you're using a drug and you're 10 times stronger than the person you're wrestling because of that drug that (shouldn't be) allowed."

Later Beggs beat Mya Engert 12-4 to push his record to 54-0 and leave him two victories away from a state title. Beggs got a bloody nose during that match and had to stuff gauze up his right nostril to stop the bleeding. It didn't slow him down much as he added several points after that to capture another decisive win.

Beggs hugged Engert and pumped his fist in the air after the win before darting off the mat. Engert was weeping as she walked away, and her coach shooed reporters from the area with a stern: "No comment."

Beggs, who reached the state tournament after two opponents forfeited, will face Kailyn Clay in the semifinals on Saturday morning. It will be a rematch after he already beat Clay at the regional tournament.

The controversy over Beggs' participation in the women's sport comes at a crucial moment, as the public and politicians debate how they should react to the growing belief that gender is fluid. Just this week, the Trump administration announced an end to federal protections which allowed transgender students to use facilities based on their gender identity, leaving states and school districts to determine their own policies.

And in Texas, lawmakers are considering a bill similar to the controversial HB2, a law in North Carolina that prompted the NBA to move this year's All-Star game out of that state. If passed, the Texas version, called SB6, would require transgender people to use the bathroom of their "biological sex."

Attorney Jim Baudhuin tried and failed to get injunctions before both the district and regional meets to prevent Beggs from competing while he transitions. He told The Associated Press earlier this week that he doesn't blame Beggs for the situation, but faults the UIL.

"The more I learn about this, the more I realize that she's just trying to live her life and her family is, too," Baudhuin said of Beggs. "She's being forced into that position. Who knows, through discovery we may find out that's not the case. But every indication is, the way the winds are going now, the blame rests with the UIL and the superintendents."