EDGEWATER -- The borough plans to end its contentious roundup and gassing of geese, but not because of protests. Canada Geese in Edgewater. (File photo)  Mayor Michael J. McPartland says the borough did not renew its contract with the... 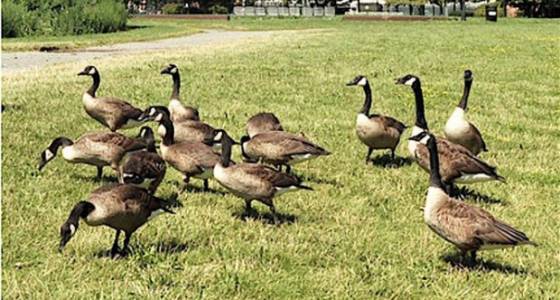 EDGEWATER -- The borough plans to end its contentious roundup and gassing of geese, but not because of protests.

Mayor Michael J. McPartland says the borough did not renew its contract with the U.S. Department of Agriculture "for capture and euthanasia of [Canada] Geese," because the program helped bring the number of geese down significantly.

"Last year we euthanized only seven birds," McPartland said Tuesday. "That is down from about 100 birds four years ago."

Protesters with the League of Humane Voters, which lobbies for animal-friendly laws, descended on the borough last year to protest the gassing of geese with carbon dioxide. There was a "Geese Protest" on River Road and protesters asked the council and mayor to use more humane methods to get rid of the birds.

The council complained that the geese inundated the local marina and parks. The borough even passed an ordinance two years ago that said "the quality of life for Edgewater residents" is diminished due to the birds.

A petition signed by over 5,000 people against the gassing of the geese, heralded the borough's moves as a victory in their campaign to stop it.

McPartland said the protests had nothing to do with the decision and he is not ruling out using the USDA program again if the geese grow in numbers.

The mayor said the birds wreaked havoc on Veterans Field as it was undergoing renovations. The park closed in 2011 due to toxins that were found in the soil. The park reopened in December.

For now, the borough plans to keep the geese at bay from Veterans Field with habitat modifications and possibly a Border Collie stationed at the park, McPartland said.

McPartland said protesters only picked on Edgewater's program because of it is one of the fastest growing towns in the state.

"They crucified us, the town and council, looking for notoriety," said McPartland. "There are 70 municipalities in the state that use the USDA program and kill far more birds than us."