CLEVELAND, Ohio -- Astronomers have announced the discovery of a solar system, called Trappist-1, that contains 7 Earth-sized planets.  Scientists believe some of the planets may be able to sustain life.  But can they sustain heated Congressional... 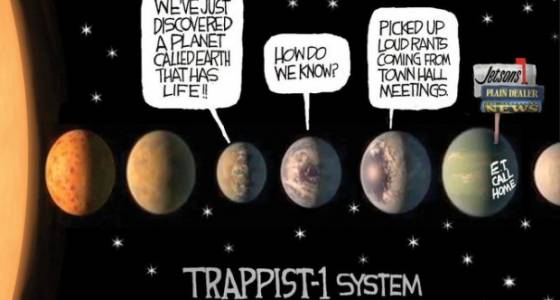 CLEVELAND, Ohio -- Astronomers have announced the discovery of a solar system, called Trappist-1, that contains 7 Earth-sized planets.  Scientists believe some of the planets may be able to sustain life.  But can they sustain heated Congressional town hall meetings?

The solar system is 40 light-years away.  Some members of Congress may be willing to travel that far to avoid their angry constituents at a town hall.

About a month ago, it dawned on Republicans in Congress that they would be on the hook with voters for any negative changes to Obamacare.   It had finally occurred to them that if they made the Affordable Care Act worse, they would be held accountable and the new plan would be dubbed 'Trumpcare'

That reality has been confirmed at Congressional town hall meetings around the nation, where voters anxiety over changes to Obamacare has dominated the heated exchanges with their representatives.

Speaking at an Orlando healthcare conference, Boehner said 'repeal and replace' is "not what's going to happen."

"They'll fix Obamacare, and I shouldn't have called it repeal and replace because that's not what's going to happen.  They're basically going to fix the flaws and put a more conservative box around it," said Boehner.

Republicans have been unable to agree on a replacement plan for the past eight years.  It's unlikely they'll be able to do so now.

Boehner said that Republican's failure to agree on a plan stretches far beyond the past eight years of the Obama presidency.

"In the 25 years that I served in the United States Congress, Republicans never, ever, one time agreed on what a health care proposal should look like.  Not once.   And all this happy talk that went on in November and December and January about real, repeal-- yeah, we'll do replace, replace --I started laughing, because if you pass repeal without replace, first, anything that happens is your fault, You broke it."

The White House and some Republicans have dismissed the town hall meetings as being filled with paid protestors planted by Democratic party organizers.   Several Republican officials disagree with that claim.

Senator Chuck Grassley (R-Iowa) said there's no "evidence" that outside, paid protesters are posing as constituents from the districts or states.

On CNN, Rep. Mark Sanford ( R-S.C.) said those attending his meeting were "real people with real concerns in terms of what came next on health care.  This wasn't an artificial crowd.  It wasn't manufactured."

Attendees are now showing how much they resent being labeled paid protesters. At a recent Sen. Tom Cotton (R-Ark) town hall, a woman started her remarks saying, "I'm from Fayetteville, and I'm not a paid protester."   Cotton, to his credit, faced the fire and said, "I don't care if anybody here is paid or not.  You are all Arkansans."

President Donald Trump just scored a major upset election victory in large part because he listened to the "forgotten people," or at least pretended to listen and pay attention to them.   It would be a mistake for Republicans and Democrats not to listen to the message being delivered from their constituents at these town hall meetings.

Democrats dismissed the grassroots Tea Party movement and Trump's rural support and  it ended up costing them the House, the  Senate and then the White House.

The town hall meetings are an example of Democracy at work.   And sometimes that work can be loud and heated.  It's never bad when elected officials, at any level of national, state and local government, are reminded that they actually work for and are paid by their constituents, not lobbyists and political parties, and are held to account.