Galleries Videos CONTACT ADVERTISE
Famagusta 30°
few clouds
BUSINESS EDUCATION ENTERTAINMENT HEALTH POLITICS SCIENCE SPORTS TECHNOLOGY
12:08 Guide To Online Sports Betting: How To Choose A Sportsbook
08:28 What Are Some Reasons to Consult a Brain Injury Lawyer?
09:24 Blockchain Solutions for Enterprises: How To Increase Efficiency And Profitability
07:06 How To Deal With A Car Crash In New York
17:43 Tips to keep in mind while choosing the casino site
11:34 Relation Between Employee Theft and Pre-employment Screening Check
04:37 Search your own desired site to play sports for betting
18:00 Top 3 Career Path Options for Business Analysts Preview
15:35 The history of Imen Jane, who is the influencer and the charges on the...
18:48 Sebastian Vettel's Greatest Races
BIST
1128
GOLD
455.613
USD
7.6057
GPB
9.7627
EUR
8.8458
Breaking News
Top 3 Career Path Options for Business Analysts Preview
Close

A probe has been launched after a number of the famous swimming pigs of the Bahamas mysteriously died, prompting fears they could have been killed deliberately.Investigations are underway to determine what caused the deaths of the much-loved animals after... 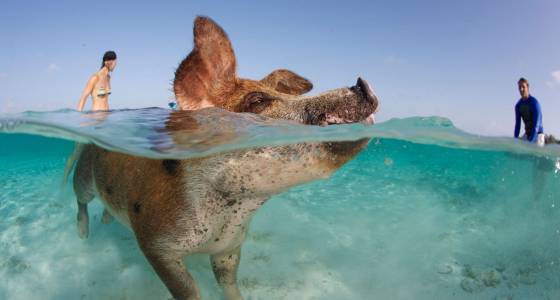 A probe has been launched after a number of the famous swimming pigs of the Bahamas mysteriously died, prompting fears they could have been killed deliberately.

Investigations are underway to determine what caused the deaths of the much-loved animals after around seven or eight of them were found dead last weekend.

The bodies of the lovable creatures – which have become one of the country’s most popular tourist attractions – were thrown into the sea after being discovered.

President of the Bahamas Humane Society (BHS) Kim Aranha told Tribune 242 that vets were conducting tests but could not say how long it would take to get the results.

She said: “It could just be a horrible accident where they ate something poisonous.

“It could be malicious – but I don’t really see why someone would go out of their way to hurt those lovely animals.

“I know there are a lot of silly sailors that go and feed them alcohol to try and get them drunk but that’s not to mistake them with the tour operators based out of Nassau who have treated them with excellent care.”

One of the pigs’ owners, Wayde Nixon, agreed that his beloved animals were likely fed something bad.

He told the Nassau Guardian: “We had them pigs there almost 30 years, and never has this happened before – but now we are going to have to regulate it.

“Right now it’s blowing out of proportion with people, anybody bringing food there, anybody doing what they [want to] do.

“We have people coming there giving the pigs beer, rum, riding on top of them – all kind of stuff.”

There are varying reports as to how many of the pigs have survived, with sources placing the number at between seven and 15.

The remaining animals are understood to have been examined and vaccinated as a precaution.

But there are now fears the mysterious deaths could harm the local economy.

The pigs draw many visitors to the area, with celebs helping to raise their profile by including them in their holiday snaps.

It’s not entirely clear how they ended up living on the Exuma Cays.

Local legend has is the animals were left there long ago by a group of sailors who intended to come back and eat them.

Another rumor claims the pigs swam to safety on the islands after escaping from a shipwreck.

But Nixon claims he is responsible after releasing four sows and one boar onto the uninhabited island of Big Major Cay in the 1990s.

The idea was to create a sustainable food supply in the event the “Y2K” millennium brought about social collapse in the year 2000, he told the Today show.