MEDINA, Ohio - Three Medina City Police Department officers have received the Medal of Valor for their heroic efforts during an explosion and fire at an apartment complex that left two people dead and one critically injured. The Medal of Valor is the... 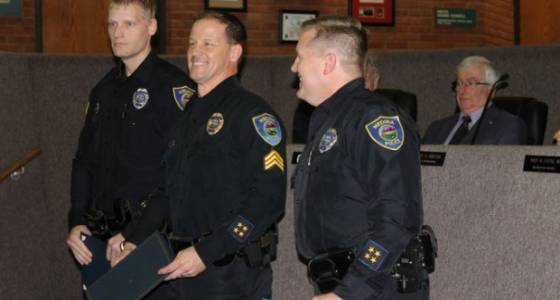 MEDINA, Ohio - Three Medina City Police Department officers have received the Medal of Valor for their heroic efforts during an explosion and fire at an apartment complex that left two people dead and one critically injured.

Also recognized were 39 other safety forces workers who responded to the fire at 451 Springbrook Drive on Feb. 9.

Police and firefighters from the city, the Medina County Sheriff's Office, Medina Township, Montville Township and Sharon Township all rushed to the scene at 3:15 a.m.

A natural gas leak inside the Medina Village Apartments building caused the explosion. Eighteen-year-old Jacob Drake was killed when the top floor collapsed. His parents, Robert and Sheila Drake, were severely burned in their attempts to save their disabled son.

Forty-two first responders from Medina, the Medina County Sheriff's Office, Medina Township and Montville Township were honored last night for their efforts in battling a fatal explosion and fire at the Medina Village Apartments Feb. 9.Ann Norman, special to cleveland.com

Horton, Winebrenner and Martincin were the first to arrive on the scene. Jacob's parents rushed up to them, saying their son was still trapped inside. All three officers entered the burning building to try to save him, but were turned away by the smoke and flames.

"Their selfless acts of courage, while at great risk to their personal safety, demonstrated their exceptional valor while serving the residents of Medina," he said.

Mayor Dennis Hanwell said the tragedy showcased the ability of safety forces from throughout the county to work together.

In Medina, it is standard procedure for police, firefighters and the Life Support Team to collectively respond to such situations, guaranteeing that there are enough first responders available to help people in need.

"It's especially beneficial on a hazardous and unexpected situation like this," he said.

Ward 2 Councilman Dennie Simpson, himself an LST member, thanked the first responders for their professionalism and expertise.

"I know it was a difficult situation. I'm glad you all came home safe," Simpson said.

Ward 3 Councilman Mark Kolesar, who represents residents in the apartment complex, thanked the officers for putting their lives on the line.

"You did everything you could," Kolesar said.

He also thanked the city's chief building inspector, Dan Gladish, who went out to check the rest of the buildings in the sprawling complex and "make sure all of there residents were safe." Several other natural gas leaks were discovered.

In addition to the Medal of Valor winners, the following first responders were honored: