TAMPA — Detectives were at the scene late Friday of what appeared to be a double murder and a suicide on Hickory Creek Drive in Brandon, the Hillsborough County Sheriff's Office reported.7 Months Ago3 Months Ago1 Week AgoThree bodies were discovered inside... 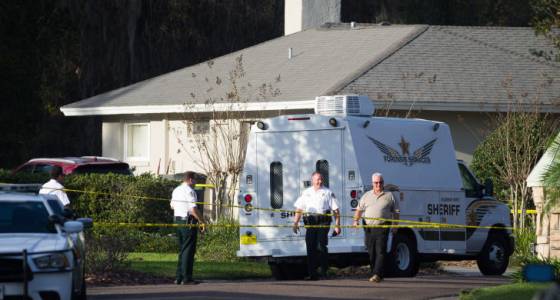 TAMPA — Detectives were at the scene late Friday of what appeared to be a double murder and a suicide on Hickory Creek Drive in Brandon, the Hillsborough County Sheriff's Office reported.

Three bodies were discovered inside a residence at 132 Hickory Creek Drive, the agency said.

Investigators were waiting on a search warrant Friday evening to enter the property.

"At this time we have no further information to release," sheriff's spokeswoman Cristal Bermudez said.

Confirmation of the victim's identities by the Hillsborough County Medical Examiner's Office may not occur until Saturday, she said.

Neighbor Lisa DuMond, who lives down the street, said investigators told her the deceased include two women and a man.

She was sleeping during the day Friday and woke up to news of the deaths.

"I didn't hear anything or see anything funny," she said, "but it's weird seeing the helicopter circle around my house. It's pretty freaky to know this could happen anywhere."

The setting is the Hickory Creek neighborhood of east Hillsborough County, which is south of Bloomingdale Avenue and west of Bell Shoals Road. It's a picturesque, family-oriented neighborhood of large homes and large lots, shaded by mossy oak and cypress trees. Some residents have horses and stables, and a riding trail links some of the homes.