Thunderstorms and strong winds left thousands of utility customers without power and caused damage around New Jersey Saturday night. In Sussex County, Jersey Central Power & Light reported 4,873 customers were without electricity as of around... 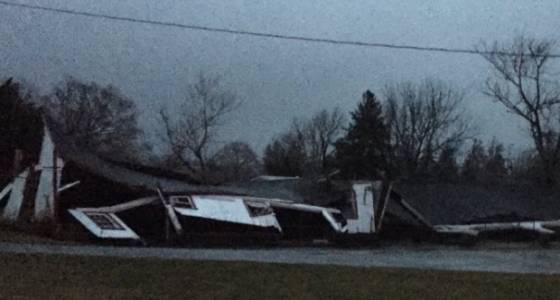 In Sussex County, Jersey Central Power & Light reported 4,873 customers were without electricity as of around 7:30 p.m. The majority of the outages were in Stillwater Township, Vernon, Wantage and Hampton, according to the utility company's website.

Scott Takac, a Jersey Central Power & Light spokesman, said crews were working to restore service but there was no immediate estimate available on when repairs would be completed.

"We'll have crews working until power is restored," the spokesman said Saturday night. He asked anyone who encounters downed wires to call the company at 1-888-544-4877.

Outages were largely caused by tree limbs hitting wires, he added. There were no immediate reports of damage to the electricity company's substations.

Trees were downed across the state as winds and rain moved through the region, according to officials.

At least one structure at Space Farms Zoo and Museum in Sussex appeared to have major damage from the storm, according to photos shared on Twitter.

Jill Space, who runs the family business, said in a Twitter post that all animals were safe at the facility.

"...all animals are fine. We will start the clean up tomorrow," Space said via Twitter.

The National Weather Service reported a tree down on Route 94 in Frelinghuysen Township in Warren County at 4:55 p.m. and trees down in the city of Salem in Salem County about 4:55 p.m.

More damage at the zoo! All animals are safe! pic.twitter.com/wV8xIHHysX

Len Melisurgo contributed to this report.