Thousands of singers vie for shot at fame on "The Voice"

While waiting for his 60-second shot to impress producers of reality-TV show "The Voice" on Saturday, Johnny Chattin felt inspired to jump on a chair and lead dozens of other aspiring performers in a version of Bruno Mars' "Uptown Funk."Music... 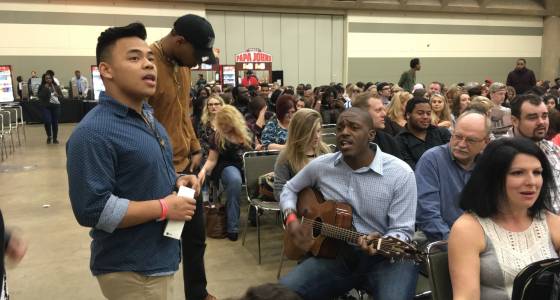 While waiting for his 60-second shot to impress producers of reality-TV show "The Voice" on Saturday, Johnny Chattin felt inspired to jump on a chair and lead dozens of other aspiring performers in a version of Bruno Mars' "Uptown Funk."

Music is in his blood and helped him growing up in a neighborhood filled with poverty and violence, said the 22-year-old from Philadelphia.

"My grandmom played piano and taught me," said Chattin, who added that he has since sung in bands. "She always taught me to never give up and always push myself. I want to reach that star level so I can inspire those that have lived through what I lived through."

He was among as many as 7,000 people who traveled from throughout the U.S. for the singing competition show's open-call auditions at the Baltimore Convention Center.

It marked the first time the show has looked for talent in Baltimore, the final stop in a tour that has included Chicago, Las Vegas and Nashville, Tenn. Those who make it through a series of audition rounds will appear in Season 13. Season 12 premieres at 8 p.m. Monday on NBC.

Kyle Huston, 13, a seventh-grader from Virginia, with his mother, Shelly Huston, came to the Baltimore Convention Center on Saturday to audition for "The Voice."

Kyle Huston, 13, a seventh-grader from Virginia, with his mother, Shelly Huston, came to the Baltimore Convention Center on Saturday to audition for "The Voice."

Kyle Huston, 13, came with his mother from Woodbridge, Va., to try out.

"I just feel like I want to get the word out that it's OK to sing in middle school, because everyone treats it like it's embarrassing," said Kyle, who sings in the chorus and performs in musicals at school.

Kyle, who said he watches "The Voice" on an occasional basis, planned to sing "Treat You Better," by Shawn Mendes.

Asked what she thought her chances were, Roxanne Jarrett, 46, a Montgomery County street performer who has trained in Broadway show tunes, as well as classical music and opera, answered with a laugh: "Oh, slim. I came here for the fun and the experience."

Warm up those vocal cords, Baltimore. The NBC singing competition “The Voice” will hold open call auditions on Saturday at the Baltimore Convention Center.

Warm up those vocal cords, Baltimore. The NBC singing competition “The Voice” will hold open call auditions on Saturday at the Baltimore Convention Center.

When she performs in Washington and Silver Spring, "people keep telling me I should audition for 'The Voice,'" Jarrett said.

The number of singers picked in each city varies each year, said Michelle McNulty, supervising casting director for the show.

When it comes to making selections, she said, "We listen for the voice first, but beyond that, it's somebody that sort of really knows who they are and is being themselves and is really clear on the type of artist that they are and that they want to be as they move forward in this process.

"When they're singing whatever they want, it's also like, 'Just because I like Beyonce doesn't necessarily mean I should be singing Beyonce,'" she said. "You need to be aware of what your voice can do."

It starts with blind auditions, in which musician coaches judge based on voice alone, not looks. Those are followed by "battle rounds," "knockouts," "live playoffs" and, finally, live-performance shows.

On Saturday, many singers waited hours, forming a line that stretched well over a block outside. They filed into a large area holding a few hundred people before being led to chairs outside audition rooms.

One show staffer reminded waiting performers to turn off their cellphones, breathe and smile. Family and friends waited outside the convention center, except for parents of minors.

Each singer, in a group of 10, was asked to stand in front of a producer and sing a chorus or verse of a song.

Most walked out without the coveted "red card," which meant a callback and the possibility of advancing to the next round. But others emerged with smiles and a card.

"It hasn't hit me yet," one woman said into a cellphone as she was directed away by show staffers.

Emilly Suguru, 14, of Fairfax, Va., did not get a callback, but she said she planned to try again next year.

"I felt like I did a really good job," she said. "I love singing. Singing is my most favorite thing to do."