This kitten is the NYPD’s friskiest officer

He’s on paw-trol.Brooklyn cops found an adorable orphaned kitten at their police station house, so they convinced their boss to adopt him as their collective pet, precinct mascot and morale-booster.Martin the six-month-old tabby is feline fine about his... 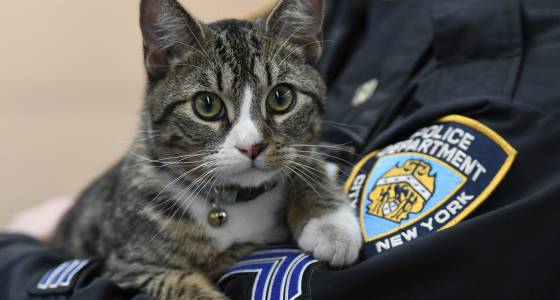 Brooklyn cops found an adorable orphaned kitten at their police station house, so they convinced their boss to adopt him as their collective pet, precinct mascot and morale-booster.

Martin the six-month-old tabby is feline fine about his cushy new life at Coney Island’s 60th precinct, where he spends his days hunting mice, nibbling turkey sandwich scraps and lounging on desktops.

In December, a woman ditched the frisky furball at the precinct on West 8th Street and Surf Avenue, melting the hearts of even the neighborhood’s toughest men in blue.

Officer Martin D. Costanza — for whom the cat was eventually named — and four other officers began lobbying for the cat to become a permanent pet.

Taylor, an animal lover, signed off the precinct’s four-legged rookie on one condition: Somebody else cleans his litter box.

The top cop has since plunked down cash for the cat’s Sheba wet food and treats while other officers have pitched in to get him shots, neutered and micro-chipped, according to the Brooklyn Paper, which first reported the fuzz-on-fuzz friendship.

Each day, Martin makes an appearance at roll call to “inspect everyone” and spread a little joy, Taylor said.

“He cheers me up. The guys come by and get a chuckle out of him, the ones who are having a hard day,” he said.

The cuddly cat also has his own special wire baskets for napping, three food stations around the precinct and plenty of toys. And he has a knack for sensing when cops need a little TLC, officers said.

“I like how friendly he is,” said Sergeant Raj Lalwani. “He’s like a dog — you call him and he’ll come. I don’t think he knows he’s a cat.”

“He has the run of the precinct.” Taylor said. “He took control of the place right away.”