This is why Trump is skipping the Correspondents’ Dinner

WASHINGTON – President Trump won’t attend the annual White House Correspondents’ Association dinner because he wasn’t elected to “pretend” to like reporters, a Trump aide said Sunday.“I think it’s kind of naive of us to think that... 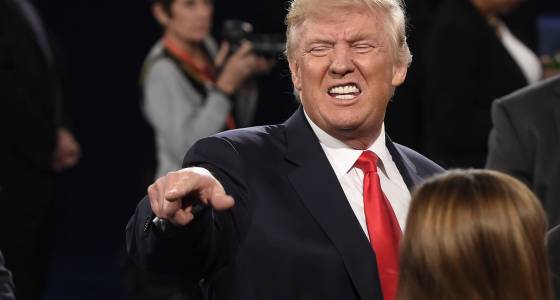 “I think it’s kind of naive of us to think that we can all walk into a room for a couple of hours and pretend that some of that tension isn’t there,” Sarah Huckabee Sanders told ABC’s “This Week.”

Sanders compared Trump’s open hostility with the press to getting egged.

“One of the things we say in the South [is] if a Girl Scout egged your house, would you buy cookies from her? I think that this is a pretty similar scenario,” Sanders said.

“There’s no reason for him to go in and sit and pretend like this is going to be just another Saturday night.”

Trump announced his decision to skip out on the presidential tradition over Twitter this weekend – two months in advance. It wasn’t too much of a surprise since Trump has openly declared the certain press is “the enemy” and his White House has blocked reporters from mainstream media outlets from press briefings.

When Trump attended the black-tie dinner as a guest in 2011, President Obama roasted the billionaire businessman for questioning his birth certificate and mocked his leadership experience by recalling an episode of “Celebrity Apprentice” where he fired Gary Busey over Little John or Meatloaf.

Trump will be the first president to skip the annual scholarship dinner since 1981. Reagan was recovering from an assassination attempt but still spoke to the crowd by phone.