The Oscar-nominated film “Hidden Figures” highlights three African-American female mathematicians integral to NASA’s skyrocketing success and, while the movie was set almost 60 years ago, there’s still a great need for brilliant talent within the... 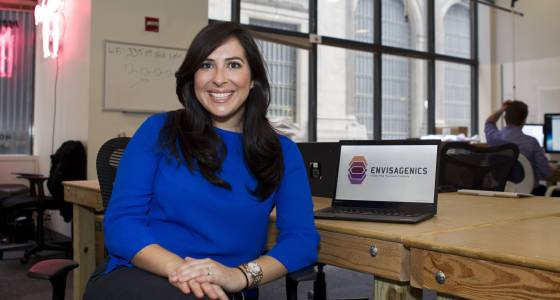 The Oscar-nominated film “Hidden Figures” highlights three African-American female mathematicians integral to NASA’s skyrocketing success and, while the movie was set almost 60 years ago, there’s still a great need for brilliant talent within the science, technology, engineering and math (STEM) fields that women can and should aspire to join.

Per 2016 data, nearly 80 percent of women employed in these rapidly growing yet still typically male-dominated industries would highly recommend it to another female friend or colleague.

As would these New York women, who are advancing one gigabyte at a time.

“In Colombia, in physics, we had to put a little ball in a cup, build a ramp to do the physics. Hands-on training sparks interest,” she says.

Pineda pursued her passion in high school (she moved to Florida in 2000), which led to advanced placement courses at local universities, meeting Gerhild Packert, Ph.D., an influential mentor, at Barry University in Miami.

“She was looking at the fruit fly — its legs were in the head of the flies. How has this happened? I was like, ‘That’s really cool!’ I wanted to know how the genetic error makes that developmental change — you can then translate that into human genetics,” Pineda says.

As a Hispanic woman from a developing country, she says she “gets tested more than others,” like the time she gave a presentation at Intel and was complimented for her English speaking skills rather than her research, but she will never lose sight of where she came from.

I will always have the accent; I will never lose it. I’m very proud of it,” she says.

Yoli Stancil, meanwhile, is very proud of her recent promotion to vice president of field operations for Verizon Wireline, where she’s responsible for serving Fios customers in New Jersey, Delaware and Philadelphia.

The Bedford-Stuyvesant resident worked her way up over 28 years at the company.

“I love to talk to people,” she says. “I was on the path to work in human resources. I came to work for Verizon and talk to customers.”

After working in operator services answering 411 calls, Stancil got promoted to representative, taking orders from customer service. She went on to spend five years as a technician navigating manholes and poles in Brooklyn and lower Manhattan.

Stancil says, “You get a lot of high-fives. You’re wearing a helmet and someone says, ‘Hey buddy!’ And you’re like, ‘I’m a girl!’ I never received flack or resistance from somebody thinking, ‘Oh, she’s a girl, she can’t get it done.’ ”

Next, she became team operations lead, which then led to her current role. One attribute that helped her ascend, aside from Verizon’s comprehensive training?

“I’m inquisitive, or nosy, curious — definitely all of those things.”

“Unlearn that this is a man’s field,” Stancil says. “If you’re told that certain jobs are women’s jobs and other jobs are men’s jobs, that’s not true. If it’s something you’re interested in, shoot for the stars.”

For Christian Crews of Bay Ridge, aiming high means troubleshooting bugs — of the computer kind. This Etsy software developer test engineer identifies the glitches, risks and unacceptable experiences so that users won’t have them.

Playing Atari as a kid, she became “super-curious about how video games worked.” Crews attended an engineering and science high school in Philadelphia where she learned programming using the computer language Pascal, igniting a passion to further pursue the field.

“As a poor, inner-city black girl, I discovered there were opportunities to get financial assistance and scholarships, if I pursued a college degree in computer science or engineering,” she says.

And although being part of an underrepresented group helped prepare her for the workforce, she says, “It definitely felt lonely.”

Once she started working, Crews got involved in recruiting efforts to “make sure that prospective employees see a woman of color be successful in the tech field . . . Tech is a male-driven industry, but diversity breeds innovation and creativity. Diversity is important.”