'The Walking Dead': Has Eugene really joined the Saviors?

CLEVELAND, Ohio - Sunday night's episode of "The Walking Dead" titled "Hostiles and Calamities" featured a change to a major character that no one saw coming. Once captured by the Saviors, it was expected that Eugene would crumble under the rule of Negan.... 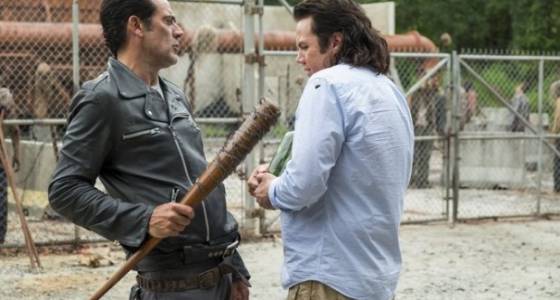 CLEVELAND, Ohio - Sunday night's episode of "The Walking Dead" titled "Hostiles and Calamities" featured a change to a major character that no one saw coming.

Once captured by the Saviors, it was expected that Eugene would crumble under the rule of Negan. But the situation didn't go that way at all.

After playfully intimidating Eugene, Negan then welcomes his new visitor with open arms. He makes Eugene the sanctuary's "Chief Engineer," sets him up in a lavish room with video games.

Negan shows an appreciation for Eugene he never really earned at the Safe-Zone. While Eugene fears Negan, he's is almost giddy with delight over the villain's approval.

Eugene even passes up a chance to help Negan's wives poison the Saviors' leader, something that comes as a huge shock. By episode's end, Eugene appears to be a full-on Savior, answer the question of "Who are you?" with a firm "Negan." In fact, he says, he was Negan before he ever met Negan (whatever that means).

This is the complete opposite of what we saw with Daryl, who refused to bow to Negan. In Robert Kirkman's comic book, Negan and the Saviors do capture Eugene. But the timeline is a different and Eugene never becomes one of the Saviors.

The show seems to be going a different route, taking a deeper look into Eugene's psyche and how he has evolved since the onset of the zombie apocalypse.

It's quite astonishing when you think about it. Eugene doesn't even bite at the fact that Negan killed his friends, justifying it by saying they've killed dozens of Negan's pals. Eugene knows he needs Negan, just like Dwight does. They've both accepted a role with the dark side.

It will be interesting to see which side of the war Eugene stays on, considering his crucial role as a bullet maker. Will Eugene help avenge the deaths of Glenn and Abraham or has he found a true home at the sanctuary?