The story of Catholicism in a nutshell | Di Ionno

"How many angels can dance on the head of a pin?" This philosophical musing from the Middle Ages asks if angels take up physical space or have only an ethereal presence. At the dawn of the Reformation in the Netherlands, a group of unknown craftsmen didn't... 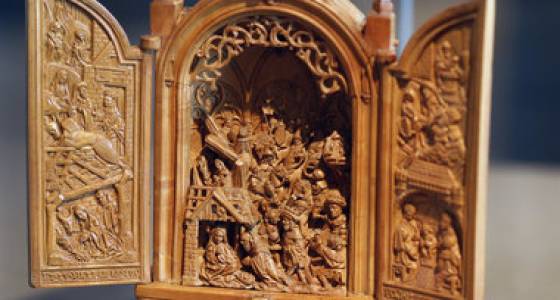 "How many angels can dance on the head of a pin?"

This philosophical musing from the Middle Ages asks if angels take up physical space or have only an ethereal presence.

At the dawn of the Reformation in the Netherlands, a group of unknown craftsmen didn't try to squeeze angels onto pins, but they created miniature, detailed religious scenes that posed a similar question: "How many figures can fit into a space the size of a large walnut?"

What they created surely are "Small Wonders," the name of the exhibit under glass of about 50 astounding works of art at The Cloisters, located in the upper reaches of Manhattan.

"These are fascinating little worlds you can peek into," said Barbara Drake Boehm of Montclair, senior curator at The Cloisters, a museum that specialized in European medieval architecture and art and is a part of the Metropolitan Museum of Art.

The works come in the form of round prayer beads or miniature altars, packed with people, angels, lost souls, animals, trees, flames, sunrays and medieval buildings all carved from wood.

In one portraying Judgement Day there are 58 complete, unique figures in an area less than 2-inches wide. Another is of the Blessed Mother amid the apocalypse, with carved fire engulfing lost souls; another has splinters resembling heavenly rays breaking through the sky.

Boehm pointed to one crucifixion scene where the guards' spears have individual carved splinters no wider than a piece of fine thread. Many of the Biblical scenes are placed in Medieval times, and every brick on every castle turret is distinct and to scale.

"The level of detail is truly amazing," Boehm said.

The details are so minute they can only be appreciated with a magnifying glass or very young eyes. In many of the crucifixion scenes, the expressions of grief are as apparent as the grim callousness among the Roman guards -- all carved on faces not much larger than the head of a pin.

The prayer beads and miniature altars were commissioned by noblemen or the wealthy and carved from boxwood, which Boehm described as having "a smooth, fine grain" that held up to "precise detail."

The star piece of the show is a rosary given to Henry the VIII of England and Katherine of Aragon on their wedding day in 1509 "before things went south" Boehm said. (She was the first of Henry's six wives and his desire for divorce was the catalyst for his split from the Roman Catholic Church.)

The largest prayer bead of the 11-bead piece has an example of carver whimsy that is ubiquitous through the exhibit.

Because the three dimensional carvings are made of several pieces and overlaid on top of one another, there is a portrait of the king and queen that is hidden to the naked eye. It was only discovered through a CT scan done at the Art Gallery of Ontario , which owns the piece and has partnered with The Cloisters for this exhibit, which runs through May 21.

"You can see the whimsy in many pieces," Boehm said.

In one scene of Christ before Pilate, a seated man is wearing the type of magnify glasses used by the craftsman. One remarkable detail in that piece is the carving of water flowing out of a pitcher, including the tiny splashes it would have made in the receiving bowl.

One altar pieces is supported by three lions. One is sleeping on the job; another is gnawing at the carver's own wooden base.

"We see a lot of flamboyance in some of the pieces; people are wearing fabulous hats," said Peter Dandridge, the conservator of the exhibit, addressing the whimsy.

Dandridge gingerly took apart and reassembled some of the pieces to get a better understanding of how they were constructed and held together by tiny wooden pins.

"The composition was so carefully created, so the multiple pieces could build up a deep relief," he said. "The altar pieces are like real altar pieces reduced to perfect scale."

Still, there is little known about where the miniatures were made, except that they came from the southern region of the Netherlands.

"We really don't know if they were made by individuals or in shops by different craftsmen," Boehm said. "We do know that the carvers had sophisticated knowledge of biblical scenes and text, because the (prayer bead) carvings have Latin inscriptions that surround the scenes."

Alexandra Suda, the Art Gallery of Ontario curator of European art and prints and drawings, who was at The Cloisters for the exhibit opening, said "there is no documentation of guilds, no records of shops.

"And this was at a time when there were documentations of property ownership and taxes being paid," she said. "We discovered very little about these craftsman."

In the collection, only one piece is signed.

"We're not sure if it was made by that individual or he owned a workshop," Suda said.

One reason for the dearth of information is that the art form had a very short run.

"These were made for 25, 30 maybe 40 years before they went out of fashion," Suda said. "They were the ultimate objects of consumption."

But with the Reformation coming - Henry VIII even outlawed rosary beads in his new Church of England - a "disdain for art objects" set in, Suda said, and the religious miniatures demand ended.

"The mysteries around these pieces are part of the appeal," Suda said. "That's part of what museums are all about."

The other parts, of course, are the awe and astonishment that hands just like ours, 600 years ago, could make such miraculous things.