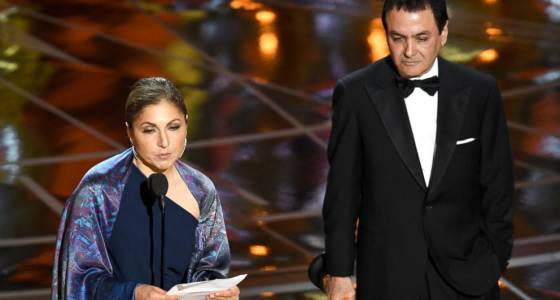 Director Asghar Farhadi announced he would not attend the 89th Academy Awards final month, days soon after President Trump signed an executive order that temporarily barred immigrants from seven predominantly Muslim countries, like the director's homeland of Iran. The order was blocked by a federal court.

On Sunday night, Anousheh Ansari accepted the award on Farhadi's behalf in a moving speech that garnered applause.

Statement read on behalf of foreign language film winner Asghar Farhadi denounces "inhumane law that bans entry of immigrants to the US" pic.twitter.com/KL5JidEhA4

"I’m sorry I’m not with you tonight," Ansari mentioned, speaking for Farhadi. "My absence is out of respect for the people today of my country and those of other six nations whom have been disrespected by the inhuman law that bans entry of immigrants to the U.S."

"Dividing the planet into the us and our enemies categories creates worry," she continued. "A deceitful justification for aggression and war. These wars protect against democracy and human rights in nations which have themselves been victims of aggression."

Ansari concluded: "Filmmakers can turn their cameras to capture shared human qualities and break stereotypes of numerous nationalities and religions. They build empathy among us and other people. An empathy which we will need now additional than ever. Thank you on behalf of Mr. Farhadi."

In a January statement to The New York Instances, the director mentioned he had chosen not to attend the Academy Awards. Instead, he said he wanted to "express my condemnation of the unjust circumstances" surrounding the banned countries.

"The Salesman" stars Shahab Hosseini and Taraneh Alidoosti as a couple who gets cast in a neighborhood rendition of Arthur Miller's 1949 stage play "Death of a Salesman."

This is Farhadi's second Oscar win. He previously took residence a trophy for his 2011 drama, "A Separation."